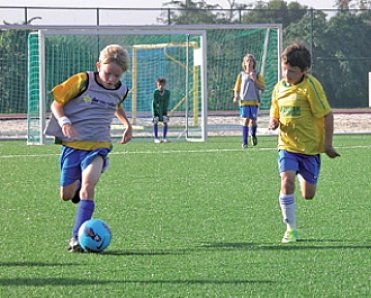 Team Synergy, a team that is co-sponsored by TSLC, won the U14 title and did so without losing a single match.

Nine local boys from Phuket made up the team with three players from the Youth Football Home and the rest of the team made up of young footballers from various schools around Phuket.

The Synergy outfit scored 33 goals in six matches and conceded only four proving to be naturals on their home turf, although the surface itself is synthetic.

On Sunday the semi final was a fiercely contested battle against a team representing Perth, Australia. The soccerroos were no match for Synergy and they were tied down by a scoreline of 5-2. Thalang Tigers had made into the final from the other side of the draw, but were no match for the Synergy team, who won the final on a 4-1 scoreline.

“We had never really played a tournament before and certainly didn’t expect to win, we are very happy and the boys deserve it” said Sean Panton, Team Synergy manager and managing director of Synergy Solutions Ltd.

BSS Phuket had also organized a “Plate” competition for losing quarter finalists. Regardless of results, this opportunity gave all the teams something to play for.
Sunday proved to be as exciting as predicted with some matches being decided by a “penalty shootout”.

Every player received a BSS Phuket tournament medal and fond memories from a great day of sport. Head Coach of BSS Phuket, Martin Hill was delighted with the event’s success.

“It was a great occasion with players from many different countries descending on Phuket. The tournament was executed well by BSS Phuket and our volunteer helpers. Special thanks must go out to our [BSS Phuket] U16 academy players who volunteered to be field marshals, the parents for scoring and our photographer for some amazing pictures. To have 34 teams from all different backgrounds compete over two days is a fantastic event and we are already planning for our third international tournament next year. BSS was formed in 1996 by Simon Clifford with only four players, we now have over one million players training each week in many countries worldwide using our unique FDS training system,” he said.