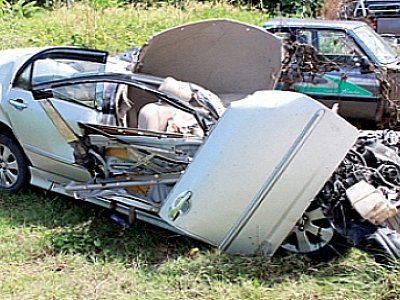 PHUKET: The driver of a truck whose alleged reckless driving killed four young Swedish tourists and their Thai driver in Phang Nga last week has been released on bail, the Phuket Gazette has learned.

Released three days later after coming up with a 300,000 baht bond, he is scheduled to appear in court tomorrow.

Khok Kloy District Police duty officer Santi Prakobpran said Mr Muhummadyukee confessed to being the driver of the truck, but provided no details as to what caused the vehicle to traverse the gullied median strip and slam head on into a Toyota Altis driven by 26-year-old Wichit Phromluang of Udon Thani province.

Mr Wichit was killed instantly by the impact, along with four young Swedes on their way to Koh Tao in Chumphon Province.

Mr Muhummadyukee walked away from the collision unhurt and fled on foot. After conferring with his employers at the Chotepatama Company in Narathiwat, he surrendered himself to Khok Kloy Police on February 3.

News of the crash was a top story in the Swedish media, especially in the small town of Varberg, where all four Swedish victims had attended school and lived.

Malin Henrikson, news editor of the Hallands Nyheter newspaper in Varberg, told the Gazette, “I can say that their deaths have touched the whole community. There have been gatherings in the town church, at the square and at the sport clubs where Johan Svensson and Tobias Larsson were active.”

Johan Svensson played handball in the team HK Varberg and his partner Frida Falk was a former track and field athlete.

Tobias Larsson played football for Varbergs GIF, which put up a memorial to him on its website describing him as team leader.

“Why should young men be taken away when they just should begin to blossom?… Why should parents, siblings, relatives and friends have to suffer that? Why, why, why?” wrote club chairman Mats Eriksson.

The accident again turned the Swedish media spotlight on the safety of Thailand as a tourist destination.

A report on the Swedish website Svenska Dagbladet listed Thailand and Turkey as the two tourist destinations with the largest number of Swedish fatalities in both 2009 and 2010.

Capt Santi said the bodies of the four Swedish victims were transported from Vachira Phuket Hospital to Bangkok for repatriation.

“I’m waiting for relatives of the Swedish victims to arrive, as I have to collect some more information as part of the investigation process,” he said.

The body of the taxi driver of the Toyota Altis Wichit Phromluang was already claimed by his relatives who arranged a cremation ceremony at Wat Ketho in Kathu, he said.

Mr Henrikson informed the Gazette on Friday that one of the couples will be buried on February 21st and the other on February 23rd, and the funeral services will be held in the town church of Varberg.