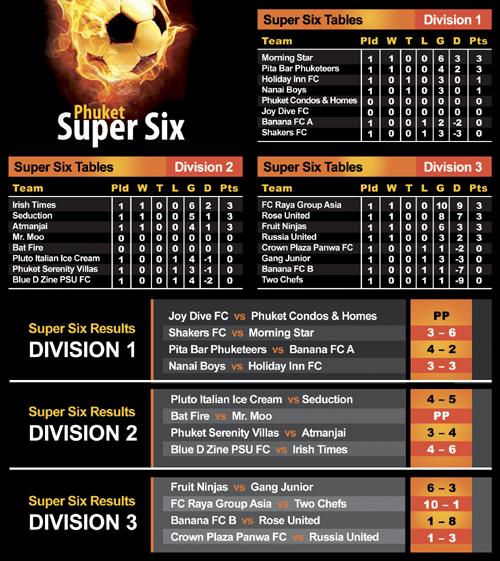 PHUKET: Season four of the Super Six League started last week at Soccer Island at Phuket’s HeadStart School, and the popularity of the league means there will be three divisions this season.

Division 1 continues to exude a high level of performance; the first week’s results from Division 2 indicate that it could be a very tight league and Division 3 is waiting for a team to challenge the early marker laid down by Rose United.

The first match in Division 1 kicked off with old rivals Shakers FC and Morning Star vying for early bragging rights. Morning Star started the better and took the lead through two early goals from Andrew Knightly and Simon Smith respectively.

Morning Star went into half-time leading 3-1. In the second half, Shakers picked up the pace and started to make a match of it, trailing by a goal at 3-4 before a goal a piece from James Saunders and Karl Ward secured a 3-6 opening day victory for Morning Star.

The two newly promoted teams, Pita Bar Phuketeers and Banana FC (formerly Puensil FC), played against each other in their first game in the top flight. Pita Bar, repeating what they did last season, and put in a strong performance to win 4-2.

Aniel Debie’s Nanai Boys were up against Holiday Inn, with both teams showing the high level of competition Division 1 is known for. Nanai Boys took the lead, but Holiday Inn pushed back for an equalizer and a share of points. The game finished 3-3.

In Divison 2, Atmanjai, who didn’t do as well as expected last season, caused the shock of the day, beating PSV 4-3.

Rose United look like they may be early favorites in Division 3, with an impressive 8-1 win against Banana FC B.