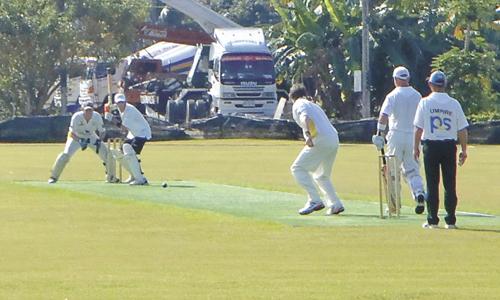 Dominance seesawed throughout both innings and it was only fitting for the winner to be decided in the last over of the second innings. Despite a determined effort by PCC, Laguna showed their class and walked away with the spoils.

The all-important toss was won by Laguna, who elected to bat first. Evergreen opener Bill Stahmer and batting partner Darren Shaw anticipated a full-blown attack from the PCC bowlers.

While Stahmer prevailed, Shaw lost his wicket in the 8th over. Youth and experience partnered up next when Valentine Guiraud came out to bat. Putting the PCC under the cosh, Stahmer mentored young Guiraud (32) as they put on a 92-run partnership. The third-wicket partnership of 53 runs between Sameer Khan (36) and Stahmer signaled the inevitability of a big score being accumulated by Laguna.

Manish Sadarangani, 1 for 25, together with Raju Seemant, 2 for 36, were the standout bowlers for PCC. After delivering a master class in batting, and tormenting the PCC bowlers with the slash of his willow to leather, Bill Stahmer lost his wicket on 83. A cameo appearance by Stuart Reading, 27 runs of 11 balls, further aided Laguna to set an intimidating total of 244 for Patong to chase.

Patong has never skulked away from a challenge and Laguna were under no doubts that the match was yet to be secured. The PCC batting lineup has proven to be resilient this season and they would have been quietly confident.

Buoyed by the performance of their batsmen, the Laguna bowlers came out guns blazing, the final bowling figures of Sami Ulla, 2 for 41, and Valentine Guiraud, 1 for 34, proving the point. By the 14th over, with the score on 62, four PCC batsmen had hit the showers.

A fifth-wicket stand of 87 runs between Preston Smith (48) and Paddy Morton (68), showing that he was just as comfortable with the bat as he is with ball in hand, brought some stability to the PCC run chase. With the score on 149 after 26 overs, Smith lost his wicket.

Captain Anthony Van Blerk came to the crease looking to guide his team to victory. With some swashbuckling hits by the captain, it was game on. The match was far from decided going into the final over. Odds were in favor of Laguna as Patong needed 30 runs for a win. When the captain lost his wicket for 40, the fat lady started to warm up her tonsils and by the end of the over it was Laguna who undoubtedly enjoyed her sweet song.

The match once again has proved the competitive nature of this season’s league and although Laguna had won this game, they are under no doubts that there will be a multitude of challengers vying for the Phuket cricket crown.

Tomorrow (January 20), TNT will play against the Village at the Alan Cooke ground at 9am.

Phuket Sports: Six of the best at Soccer Island