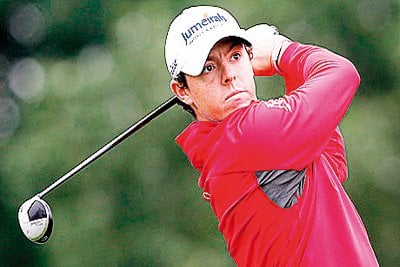 PHUKET: This week marked the second of golf’s FedEx playoffs, with the PGA’s Deutsche Bank Open at the Tournament Players Club, Boston.

The parkland golf course with narrow curving fairways requires more precision than power off the tees and tests players accuracy and short games more than their all out power games.

Only 100 players from the FedEx points list were included in the field this week, and that number will be whittled down to 70 before the next tournament.

Louis Oosthuizen split the field with a wonderful 63 on the third round to finish at 19-under par and Rory McIlroy was close on his heels after two 65s and a 67, sitting at 16-under par. Tiger Woods also made noise with three solid rounds in the 60s, and was close to the leaders at 13-under par.

The final round started well for McIlroy, who made three birdies in the first four holes and was out in 32. Oosthsuizen, after an uncharacteristic double bogey on the 5th, was out in 37, two behind McIlroy. Tiger was playing like his old self, out in 32. His charge, however, lost steam on the back nine where he only managed one birdie and finished 18-under par, good for a 3rd place finish.

The round did move Tiger’s career tour earnings to over US$100 million. Not too bad considering Jack Nicklaus earned less than six million dollars in his entire career.

With Tiger already in the clubhouse, this left Louis and Rory to fight it out, with the round literally coming down to the last putt on the 18th hole.

Needing to make a 10 foot downhill slider to force a playoff, Louis watched as his putt missed on the low side of the hole giving McIlroy a well deserved win.

McIlroy’s putting was the difference and even TV commentators were quite surprised as he hit some uncharacteristically off shots down the stretch. But his putter kept coming through right to the end.

Oosthuizen’s putting still holds him back from greatness. His butter-smooth swing is one to emulate for all aspiring golfers, especially juniors. But his putting must improve for him to reach the next level.

McIlroy by contrast had the lowest number of putts for the week averaging 25.8, basically 10-under putts per round.

What was interesting about Rory’s win was that it was the first time he had to grind it out and find that little extra something that made the difference.

For a young player these are the types of wins that can boost confidence and lead to sustained long term greatness.

McIlroy will start to hear comparisons to Nicklaus and Woods soon enough. For now, it’s just fun to watch the 23-year-old fearless player make things that we all know are very difficult seem so easy.