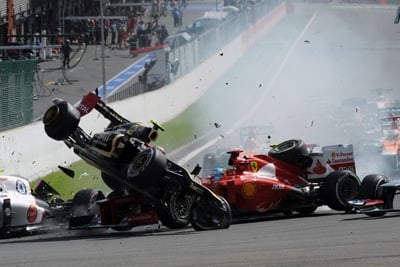 PHUKET: In my last article I said I thought Hamilton would be a very strong contender at Spa together with Räikkönen, Rosberg, Michael Schumacher, Romain Grosjean and Jenson Button. I said it looked hard for Ferrari and Red Bull to shine, but also said “Who knows“?

In the event Lewis Hamilton, Sergio Perez and Fernando Alonso were shunted off the track by Grosjean at the first corner trying to cut across Hamilton from the off – so three of my tips were out.

It was a very dangerous incident for Alonso, who might have been seriously injured by an airborne Grosjean. He sat unable to breathe for a while due to the extinguisher in his cockpit, but finally and luckily escaped with a little whiplash.

Grosjean was subsequently banned from competing in this weekend’s race at Monza for his dangerous driving. That was harsh, but was it fair? It was. Grosjean was the only one who could have prevented the accident he caused. He failed to do that. And it is not the first time Grosjean has made the same dangerous opening gambit across the line.

Button drove an exemplary race, leading from start to finish with a bold one-stop strategy. Räikkönen drove very hard in a car that was, for some reason, not performing as well as it should, to finish third. But Sebastian Vettel was a huge surprise, qualifying 10th and driving an exemplary race to finish 2nd.

Alonso is lucky it was Button who won rather than Hamilton, as it kept his lead going well. Alonso has acknowledged that Hamilton is his biggest rival. However, Vettel is now within a race of challenging it.

So, it’s on to Monza, north of Milan, and if Ferrari has any rabbits to pull from their hat, this, their home GP is the time they will do it.

Monza has hosted F1 ever since it was introduced. The track is another very fast one with long straights, only three proper corners and tight chicanes. Cars are set up with maximum performance on the straights, so the straight line speed of the Mercedes powered cars should be important again.

Due to the set up, and consequent low downforce, grip is very low and there is a premium on braking stability and traction. They approach the first corner at the end of the start/finish straight at 340 kilometers per hour and brake before the first chicane to under 80 km per hour.

This has been the scene of many first lap accidents. Look out for Pastor Maldonado. Monza is very hard on gearboxes, and with engines at full throttle for 80 per cent of the lap, engine failures are common.

Alonso will really want to impress, but it will be hard for him unless Ferrari really does have a rabbit in their hat. Hamilton desperately needs a win. Button and Vettel will seek to stamp their newly recaptured authority on the event, and Räikkönen will look to be on the podium as well. I suspect we are in for a fantastic race.

The race is Sunday at 7pm, and the practice is on at the same time on Saturday. It will be shown live on the big screen at the Green Man.