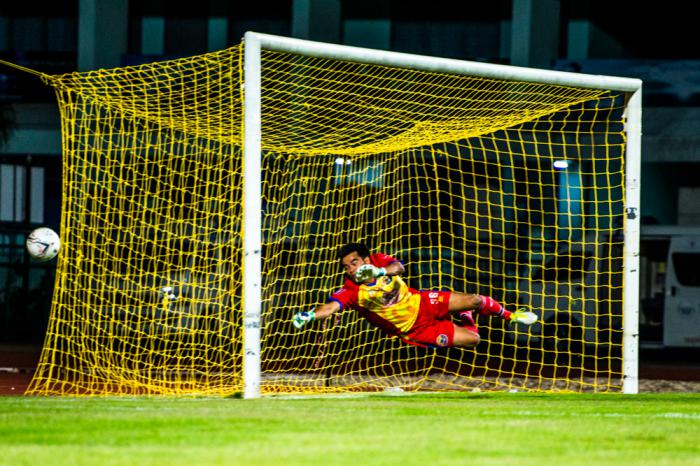 PHUKET: With a full moon overhead and a smoke filled sky, the scene yesterday evening in Phuket Town seemed more appropriate for a zombie apocalypse than a football match. The living dead did not make it out to the game, however, 5,100 fans did, and cheered on their home team Phuket FC as they lined up against TTM Customs.

Coming off the heels of their first loss of the season (2-1) to Ang Thong FC on March 8, the Ronins appeared tense during the first half of the match at Surakul Stadium. Although TTM Customs had the majority possession of the ball, they were unable to attempt many threatening shots on goal. However, Phuket FC was able to get plenty of shots on goal. While many of the goal attempts were frantic and lacked strategy, shots from Christian Alex Da Silva Santos, Eber Henrique Ferreira De Bessa and Sato Yusuke came close enough to plant a seed of worry in TTM Customs goalkeeper Nikom Kemkaeng.

Phuket FC was able to keep the ball moving towards the goal and TTM Customs delivering a couple of promising drives, yet neither team was rewarded for their efforts.

“I think they looked tense since the beginning of the game. I talked to them during halftime to be more relaxed, they have to be loose in the game,” explained Phuket FC coach Stefano “Teco” Cugurra. The coach’s pep talk seemed to help bring some order after the hectic play of the first half. TTM Customs also showed more focus and nearly peeled paint off of the far post on a too-close-for-comfort shot that lifted the crowd to its feet.

The closest Phuket FC came to scoring was when the slow rolling ball escaped a maelstrom of activity in the penalty box and midfielder Pyne Soe broke out of the pack in an attempt to edge it in past the TTM goalkeeper, alas, to no avail.

The pace quickened during the last few minutes but neither team was willing to give up a goal and zeroes remained on the scoreboard with both teams walking away with one point on the Yamaha League One ladder board. In the end, Eber Henrique Ferreira De Bessa was presented with the “Man of the Match” title for his drives and shots on goal. It’s not a loss, but Phuket FC needs points from wins in hopes of being on top to break into the Premier League.

The excitement builds as Phuket FC gears up to take on fellow southerners Krabi FC across the bay on their home turf next Sunday. Coach “Teco” expects to see a solid turnout of supporters willing to make the short jaunt to Krabi to cheer on their Ronins. See you there!