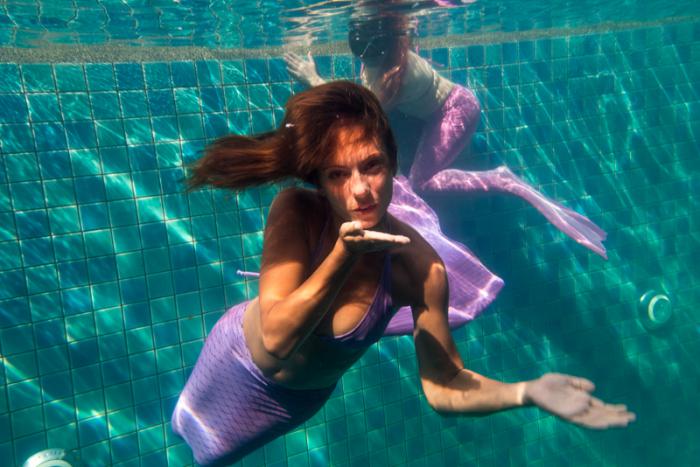 PHUKET: It wasn’t going to happen. After three failed attempts at completing a 50-meter-underwater swim – in a merman tail – it became startlingly clear that the island’s first merman might not be gold merfolk material. His freediving skills simply weren’t shaping up for high-end mythical creature status.

Things aren’t like they use to be. In the old days, merfolk merely seduced sailors or battled it out with tridents. Now the world has changed, and the sea has changed, those few mermen and mermaids still out there can flip their fins, but just don’t get too far.

Well, at least some of them. Kat Felton, better known around the world as Mermaid Kat, is about to break away from her Phuket mer-pod and depart for the Red Sea.

She will leave behind two or three working mermaids and one chubby, office-bound merman. Out of the over 100 merfolk she has certified, 30 to 35 of them have been ushered into the world as ambassadors to the ocean in Phuket – none, but one, have had to worry about an awkward frontal tail bulge.

“When I started some people had this reaction, they kind of looked down on you. Didn’t respect you,” Kat tells the three students in her last workshop on the island. “It’s hard work, you can be proud of what you do.”

Kat is serious, German serious. The course breaks down into three segments: written exam after a two hour lecture on environmental awareness and merfolks’ responsibilities as role models; technical freediving basics, including mono-tail swimming techniques; and modeling, above and below the water’s surface.

In sweeping brush strokes, Kat attempts to instill in her students her burning passion for environmental conservation. A graphic video of a man sawing off the fins of a live shark is played; she dives into the red water of The Cove, a documentary that details the slaughtering of dolphins in Japan.

“I cried all day long after that movie. From that point forward I became a vegetarian. It’s everyday life too. I don’t use bags. I don’t shower unnecessarily, ” she explains.

A 90 per cent or better is necessary on the written exam to be in the running for gold mermaid/man status. If you miss it, you can still make the podium as a silver or bronze certified merperson.
If you are a diver, then some of the test questions are pretty straight forward: Should you feed fish? True or False: I shouldn’t touch any animal underwater, only corals and rocks (trick question); True or False: More people die each year because of pet dogs than sharks.

For the underwater and above water modeling, you need to score a seven or better on a scale of 1-10. Having been Miss Germany 2010 along with countless professional modeling shoots, above and below the water, Kat knows exactly what it takes.

The difference between an untrained model and Kat is breathtaking.

The photographer working with Kat during the course, Adriano Trapani, puts it perfectly, “It’s like a car accident, you don’t want to look, but you can’t stop.”

For many, however, the challenge of being a true mermaid, or in this particular case merman, is your freediving skills.

So you can swim 200 meters? Okay. How long can you hold your breath?

To take home the gold, you must hold your breath for over 2:31 minutes; silver between 1:30 and 2:30 minutes; and bronze less than 1:30min. Lastly, it’s the underwater swim test in a monotail.

With a 95 per cent on the written test and the rest of the skill sets checked off for bringing home the gold, this was it for Phuket’s first merman.

But as Kat pointed out, even after the beach photo shoot the next day, certification through her academy is just the first step – there are much larger battles to be won in the ocean, with or without a trident.
“Mermaids [and mermen] are also entertainers, models and freedivers, but most importantly, they are ambassadors for the ocean – role models that can teach children and adults about the ocean environment,” Kat says.

Kat’s departure from the island is no doubt a loss. However, it was wonderful of her to make merit by raising, and then releasing three more merfolk back into the sea: Vivien Seek, Sirene Serene and your humble author.