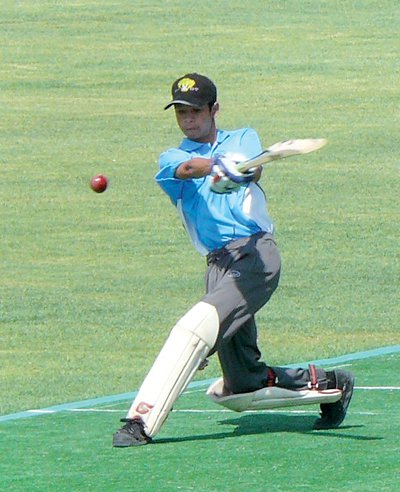 With all seven teams in the competition moving into the third round of matches, a victory and taking every available bonus point was a must for Patong while the Leopards were on the prowl for their first victory, or at least to take points from last year’s league champions.

It was a much improved performance from the youngsters, but their enthusiasm to get runs on the board cost wickets and that exuberance also contributed to the boys failing to bat out the full 40 overs, reaching a total of 95 runs in just 22.5 overs.

To ensure the Leopards weren’t thrown to the lions, Patong put them into bat first, but their flamboyant batting gained only 15 runs and the loss of three early wickets.

After a shaky start, both TP Suttiprapha (32) and SK Jutamart (16) developed confidence in their shots and the Leopard’s innings took shape. Unfortunately, Jutamart was undone by a clever delivery from Manesh Sadarangani just as he was settling in for a decent score.

Suttiprapha then took the game by the scruff of the neck, and when Dave Thomas was called on for more spin attack, it was the young Leopard who went on the offensive. One over yielded 16 runs including three boundaries.

With the score on 67, Suttiprapha fell victim to miscommunication with his batting partner, WJ Letingoo (7), who stalled in his crease when Suttiprapha called for a run. Quick thinking and action from Richard Folds and Dean Noble made sure Suttiprapha was dismissed after Noble misfielded the ball, taking the bails off with his glove to then retrieve the ball and a fallen stump as rules dictate – under vociferous guidance from the Patong skipper.

As the morning’s heat increased, the Leopards lower order wilted with the the exception of AF Uphama (15), eventually being bowled out in the 22nd over for 95 runs.

Patong may have given away more runs than they had hoped, but the Leopards certainly enjoyed their efforts at the crease made evident by the cries of enthusiastic support from the pavilion.

Stand out bowlers for Patong were Danny Hyams (2 for 14) and Richard Folds who mopped up the lower order (2 for 18).

Anthony Van Blerk (21) and Neil Quail opened the batting for Patong with the intention of chasing down the target in less than 20 overs to secure maximum available points. Van Blerk’s eagerness to get the scoreboard ticking almost cost his wicket early on when he was dropped after scoring just two runs.

Costly or not, Van Blerk and Quail (28) took the score to 54 before Van Blerk popped a delivery from Suttiprapha skywards, but this time the bowler held his catch. Quail soon followed – clean bowled by Uphama attempting to heave a full toss.

Seemant Raju (17) and Dean Noble (11 not out) set about finishing the game, but were frustrated by decent bowling and committed fielding from the Leopards who had an eye on securing at least one bonus point.

With only one run required for victory, Raju was dismissed by PM Suriya to finally give the Patong player a realistic average for the season so far. Victory eventually came in the 13th over with Noble scoring the winning run. Patong also secured a full seven points having reached the total in less than half of the alotted 40 overs.

Man of the Match was TP Suttiprapha, with Neil Quail second and Dean Noble taking third for his fine display behind the stumps.

Patong now sit on top of the table after having played three matches (click here to see IFL table).

Following the scheduled league game, Patong and the Leopards made use of the spare time and played a mixed T20 game which fittingly ended in a draw on the very last ball of the game.

The next Island Furniture League match at the ACG sees Island Cricket Club take on the Thanyapura Tigers on Sunday 22 January 2012 at 9am.