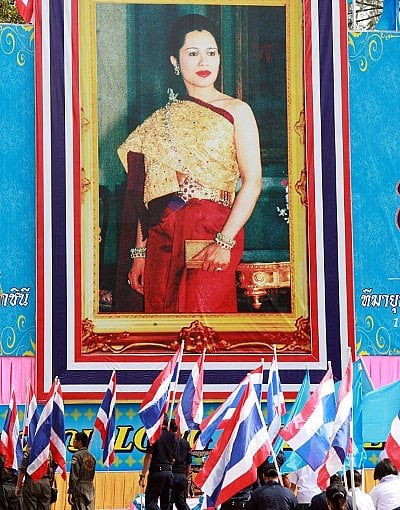 PHUKET: A host of special ceremonies are being held at different locations across the island to honor and celebrate HM Queen Sirikit’s 80th birthday and to celebrate Mothers’ Day on Sunday, August 12.

Phuket Governor Tri Augkaradacha on Wednesday presided over the opening ceremony of a tree-planting event at King Rama 9 Park (Suan Luang) in Phuket Town to honor Her Majesty and to raise environmental awareness.

Governor Tri and his wife Nalinee Augkaradacha, who is also President of the Phuket Red Cross chapter, were joined by Phuket City Mayor Somjai Suwansupana, representatives from other government departments, students and local residents.

Meanwhile, across Phuket Town, at Klong Koh Pee, a similar occasion witnessed the release of a million juvenile shrimp and other young marine animals into the canal.

Phuket Provincial Chief Administrative Officer Chaiwat Taephee was joined by Phuket Provincial Fisheries Office Chief Kavi Saranakomkul, along with local residents, teachers and students from the nearby Srinagarindra The Princess Mother School and Phuket Vocational College for the release of the marine life.

Other ceremonies to honor and celebrate HM Queen Sirikit’s birthday and Mother’s Day will be held throughout Thailand this weekend. Such activities typically comprise similar “life” projects as well as alms offerings and homage-paying ceremonies, art competitions and award-giving ceremonies to acknowledge outstanding mothers.

Everyone in the Kingdom is welcome to take part in these special ceremonies. A selection of events to be held in Phuket appears below.

August 12: The “Mother of the Year” award ceremony at Loma Park at 1pm will be followed by the annual parade along the beach road to Loma Park to honor HM Queen Sirikit. Please note that the beach road will be closed to traffic during the parade.

At 4pm, Phuket Governor Tri Augkaradacha will lead a homage-paying ceremony at the main stage at Loma Park.

After the ceremonies have concluded, the Patong Cup football tournament will start at 5pm at the field across the road from Loma Park to raise awareness of drug prevention.

August 12: Ceremonies organized by the Phuket Provincial Office will start at 6:30am, in front of 72nd Anniversary Queen Sirikit Park with a breakfast blessing ceremony by 81 monks

At 7:09 am, everyone who attends the morning ceremony will have the opportunity to offer alms to the monks.

After the morning ceremony has concluded, well-wishers may sign a book at Phuket Community Hall to pay respect to HM Queen Sirikit and to wish her a happy birthday.

Night festivities at Saphan Hin will begin at the main stage area at 5pm. The evening’s itinerary includes homage-paying ceremonies and stage performances, followed by a candlelight ceremony at 7:19pm led by Governor Tri.

The evening’s festivities will close with a fireworks show.

August 10: Activities in Rawai began this morning with a shrimp release event and a beach cleanup at Nai Harn. At 9:30am, shrimp and other marine animals were released into the Nai Harn lagoon, followed by “EM balls” (environmental microorganism balls) to help keep the water in the lagoon clean. From 10:30am to midday, a beach cleanup was held at Nai Harn and Rawai beaches.

The day’s activities will close with a palm tree preservation event at Promthep Cape.

August 11: The day’s activities to celebrate HM Queen Sirikit’s birthday will be held at Muang Phuket School near Chalong Circle.

The ceremony will begin at 7pm with a traditional Thai dance performance to honor HM The Queen.

At 7:30pm, Governor Tri will lead a homage-paying ceremony, which will include the lighting of candles and the singing of a Royal Anthem to honor Their Majesties.

After the homage-paying ceremonies, students at the school will perform a live concert until 10pm.

The event will close with a fireworks show.

August 12: The evening’s event, to be held in front of Kathu Municipality Office, will begin at 5pm. Scheduled entertainment includes performances by students from schools in Kathu District and a “Most Outstanding Mother Award”.

A candlelight ceremony will begin at 7:19 pm, and the event will close with a fireworks show.