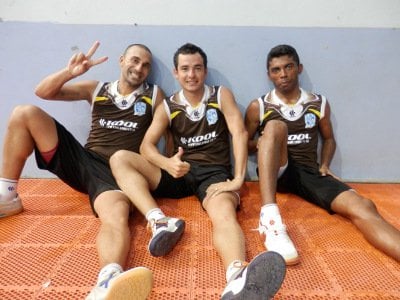 The 29-year old player will wear the number 29 shirt.

In an interview with the Phuket Gazette Jardel describes his thoughts on the eve of his first match with the Andaman Pearl:

“I like Phuket and our focus for the next match is to win and not fail as a team against Surat Thani.”

Suphol Sena-peng, head coach of Phuket United, told the Gazette that Saturday’s match against the Lightning Shrimp will be a stern test for his players as they have not had the best preparation.

“We have many problems at the club with our practice pitch, but we are starting to improve the players states of mind,” he added.

“Phuket United is the best team, we have the best players, and [in] the next match, if we win, it will make me very happy. I hope the team can finish in the top three this season.”

The island’s only pro futsal club have been training hard for their next GMM Sport Thailand Futsal Premier League (TFPL) match after they suffered a 5-3 defeat against Bangkok FC in their last game.

“Surat Thani looks like a good team, but if we work hard in the next match, concentrate and focus on the goal, we can win with the help of our supporters.”

The match will be played at Surat Thani’s 4,000 seat Indoor Sports Complex tomorrow at 6pm.

Phuket tsunami film ‘The Impossible’ drawing crowds, but no criticism