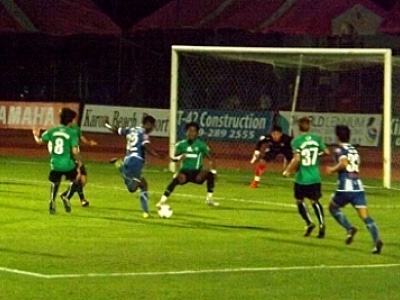 PHUKET: The Islanders fell back into into the five-team relegation zone following a 1-0 loss last night to 3rd place Sri Racha Suzuki FC.

Despite a wide margin in league points, the competition, played in front of 3,100 fans, was evenly matched with the Sri Racha “Blue Marlins” enjoying only slightly more possession than Phuket.

Indeed, it was looking as if Phuket FC – reinforced with the leadership of a capable new head coach, Anuruck “June” Srikerd as of Wednesday – were going to earn at least a point last night.

The crowd were on their feet on a number of occasions with near-scoring chances enjoyed early on by Phuket’s Narakorn Wisetthanakarn and Koreans Boash Chun and Seongwon Byeon.

Sri Racha also kept up their attack and their two leading scorers, Argentine Gaston Raul Gonzalez (11 goals) and Japanese Korjima Seiya (9 goals) were unable to beat Phuket’s Kampon Phatomakkakul, who made a number of commendable saves.

Unfortunately for Phuket, Sri Racha’s African-Belgian import Nlome Ndebi Berlin came off the bench to replace Gonzalez in the second half.

Berlin proved to be a menace for Phuket’s defense, breaking through on a number of neck-hair raising runs.

Finally, in the 86th minute Berlin broke through again, this time beating Phuket’s keeper who had run out in a desperate attempt to clear the ball, with the Belgian comfortably sending the ball through to the open goal and netting his fourth of the season.

Phuket responded and earned a few set-play chances in dying moments, with one header by Ivorian Kanoute appearing to have bounced over the line before being cleared by the Sri Racha defender.

Despite four minutes of added time, Sri Racha were able to hold on to their lead to the final whistle (click here to see the action).

The result secures the Marlins 3rd place standing – the final promotion place. Though Sri Racha are tied on points with Bangkok United, they lead on goal difference with both trailing leaders Suphanburi by only one point.

The loss drops Phuket into 14th place and the final relegation zone.

With only five matches remaining – three away and two at home – the Islanders find themselves in dire threat of relegation.

Their next match, this Saturday, October 6, is a tough away fixture against 2nd place Suphanburi. With little time to recover, the Islanders will fly back to Phuket – courtesy of President Pamuk Atchirachai – to take on Khon Kaen FC at home in a midweek, Wednesday, October 10, match at Surakul Stadium.

Currently one place below Phuket, Khon Kaen are in just as much threat of losing their Division 1 standing as Phuket, so tensions are expected to be high for both sides playing for survival.

Phuket will have a week’s rest before their next match, away at Rajpracha on October 20, before returning home for their season finale at home against JW Rangsit FC.