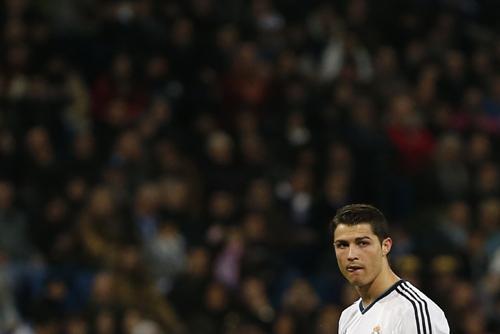 But the fate of the two Spanish giants in Thursday’s draw at UEFA headquarters attracted the most interest as both were pitted against clubs with decades of European experience.

Real, the Spanish champions, have been disappointing in La Liga this season and they finished second in their Champions League group behind Borussia Dortmund.

But Ronaldo, a United player from 2003 to 2009, will be desperate for Real to rise to the occasion against the club at which he won the European Cup in 2008.

Real manager Jose Mourinho, once of Chelsea, will also come up against his old rival Alex Ferguson.

“I’m sure it’s going to be a special game for him (Ronaldo),” said Emilio Butragueno, Real Madrid’s director of institutional relations. “I think the fans will be very, very happy with this very attractive, thrilling tie.

“It will be a great experience for everybody. I would have liked to have played against United later in the competition but they won’t be pleased either.”

Manchester United, three-times European champions, have played Real eight times and won only twice. Real, who will host United in the first leg on February 13, last won the European Cup in 2002.

Barcelona are now 2-1 favourites to win the Champions League although they could hardly have picked a club with more experience of success in Europe in seven-times winners AC Milan when the competition resumes in mid-February.

World player of the year Messi has scored 90 goals in 2012 and has fired Barcelona to a nine-point lead in La Liga while Milan are 14 points adrift of Juventus in Serie A and finished second behind Malaga in their group.

Barcelona vice-president Josep Maria Bartomeu told Spanish broadcaster Canal Plus: “Milan are one of Europe’s greats and a club that commands a huge amount of respect.

“They are not going well in their league right now but they have some excellent players. They are not currently at their best but football changes from one day to the next.”

Juventus, who last won the European Cup in 1996, finished top of their group and will not be disappointed to have drawn Celtic who pulled off a major shock by beating Barcelona this season.

“Over two games anything is possible,” he said. “It’s a beauty against one of the traditional European teams.

“In terms of quality it’s going to be very, very tough.”

Bayern confident
Bayern Munich, beaten by Chelsea in last season’s final, have a nine-point lead in the Bundesliga and were content to have drawn Arsenal who have struggled this season for any consistency.

“We can be satisfied with the draw, but we mustn’t under-estimate them,” said Bayern chairman Karl-Heinz Rummenigge.

“It’s important we try to come away from London with a good result, score a goal there and lay down a marker. We can win it, and we start as favourites.”

Chelsea failed to qualify for the last 16 from the group won by Juventus.

Paris Saint-Germain have invested heavily in players over the past 12 months and now lead Ligue 1 on goal difference. Valencia are mid-table in Spain and in some disarray after losing to Rayo Vallecano at home at the weekend.

“In the Champions League, it always depends on the moment you play the game, the run of form,” he said.

“We are going to have a difficult encounter with Valencia who are an experienced side,” he said.

Valencia director Fernando Giner told Canal Plus: “If we have got this far it’s because we are among the 16 best teams in Europe but PSG are a tough opponent.

“We have to be satisfied to be here and it’s a way of coming together at a difficult moment to achieve the result we all want. During these difficult times the Champions League is tremendously exciting for us.”

In the other ties, Galatasaray will play Schalke 04, Shakhtar Donetsk take on Dortmund and Porto face Malaga.

Dortmund, Bundesliga champions and winners of a tough group including Real, Ajax and Manchester City, were wary of their Ukrainian opponents.

“They are not necessarily the team we would have wanted,” said Dortmund chief executive Hans-Joachim Watzke. “It’s a very difficult tie but we showed in the group stage that we can beat strong opponents.”

“There are no easy opponents at this stage of the competition but to be frank I think we have a good chance of reaching the quarter-finals if we play to our potential,” said team captain Benedikt Hoewedes.

Phuket Sports: Fergie scoffs at talk of retirement for trio