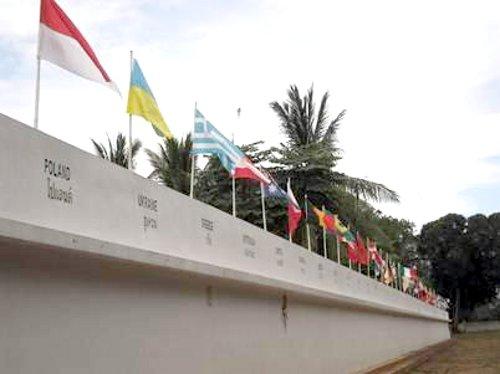 PHUKET: The Phuket chapter of the US Navy League has announced that the Tsunami Memorial Wall, which in years past has fallen into a deplorable state, has been readied for this year’s tsunami remembrance service on December 26.

The Navy League volunteered for the role of caretaker for the remembrance site last year, and the volunteers organized a community project with assistance from sailors from the visiting USS Pinckney to restore the wall and the surrounding area in preparation for last year’s memorial service.

“Our caretaker role for the following years simply entitles painting as needed, buying and maintaining the flags for each of the 45 countries on the memorial, and any future improvements to the Wall or the surroundings area,” explained Brad Kenny, Director of Community Service at the US Navy League Phuket.

“This year no painting was needed and there were some slight adjustments in the flags with a few more replaced,” he said.

“The wall has been cleaned and the 45 country flags are up. As of yesterday [December 21], the Tsunami Memorial is in fine shape, with the Mai Khao OrBorTor [Tambon Administrative Organization] cutting the grass in preparation for the annual Tsunami Remembrance Ceremony,” Mr Kenny added.

The Memorial Service and ceremony schedule has been announced as follows:


Get more from The Thaiger