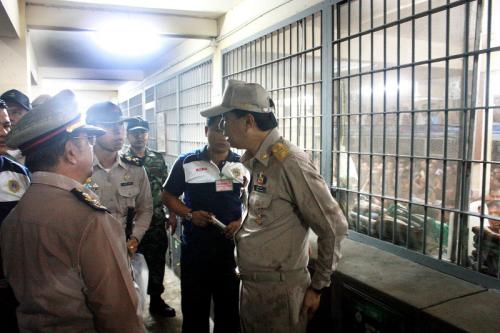 Phuket’s billion-baht prison slated for construction in 2015 will provide welcome relief to the inmates at the current facility, whose number is now more than three times the century-old prison’s original capacity.

With Cabinet approval already secured for the funding, all that remains to make the dream prison a reality are for the plans to be finalized and the construction to begin.

PHUKET: Phuket Governor Maitri Inthusut was blunt in his appraisal of the overcrowding at Phuket Provincial Prison during the pre-dawn mass search of inmates and common areas there on April 30.

“The number of prisoners here is about three times the facility’s capacity,” he noted. Good news came just days later when Prison Chief Rapin Nichanon confirmed that the project to build a “latest technology” prison in Phuket to accommodate up to 3,000 inmates was on track to commence construction in 2015.

“The Cabinet has approved the project in principle. The one billion baht required is supposed to be in our hands by 2015,” he said.

“The new prison is necessary since the current one is 115 years old. All parts of the building are old and the prison was originally built for 800 prisoners only. Now we are approaching 3,000 prisoners,” Chief Rapin explained.

“A new prison is the only solution, as the old prison cannot be expanded any further,” he said.

The plans for the new facility, to be built on 108 rai of government land at the site of the Bang Jo detention center in Srisoonthorn, Thalang, have yet to be finalized, but once they are Chief Rapin envisages the new prison to be the best in the country.

“It will have many of the latest security measures, including CCTV,” he said, adding that he was not at liberty to divulge any details about the new facility.

The new prison will require about 100 prison officers, double the number of officers currently stationed at Phuket Prison.

Critically, the new prison has the backing of local residents, chief Rapin said.

“Nobody is against the prison as it will also benefit the area. A better road will be built, as well as a public football pitch and playground, which local residents have asked for,” he explained.

Along with the capacity for more inmates to be kept in less crowded conditions, Chief Rapin foresees other changes.

Forty-seven rai behind the security wall will separate inmates by category, such as foreign prisoners and drug offenders.

“It will also allow us to separate those inmates awaiting trial from those serving sentences,” Chief Rapin said.

“In addition, we may be able to house inmates serving 20 to 30-year sentences. The maximum sentence of current inmates is 15 years,” he said.

Another benefit to having a larger facility, Chief Rapin pointed out, was prisoner rehabilitation.

“There will be many more career training classes so prisoners finishing their sentences can earn a living after they are released.

“From my experience, some people think that only bad people walk out through the gates when we release them. Not true. We work hard on giving our prisoners education and career training. Some of them even finish an Open University degree while detained,” Chief Rapin said.

“Please give them a chance to prove themselves,” he added.

A key individual at Phuket Prison is Suparat Tantipongwiwat, chief of the General Administration Department. For some time now, she has been concerned about the welfare of female prisoners at the prison.

“The female zone has more than 300 female inmates sharing an area designed and built for only 100,” said Ms Suparat.

“In addition to that, we are also caring for seven children and three pregnant women. This doesn’t include the elderly and sick female prisoners,” she added.

Children in the female zone range from a month to a year old.

“When we have new pregnant inmates, we send them for a health check and make sure they have access to a doctor.

“After the mother gives birth, we try to identify a relative or close family friend who can look after the baby while the mother is imprisoned. If not, the baby will stay with the inmate for the first year,” said Ms Suparat.

Although the female zone is overcrowded, the prison is still able to provide a special area for nursing mothers and their babies.

“I understand that babies must be with their mothers. But we do not want them raised in such an environment… When babies reach the age of one year we get them out of the prison environment. We must relocate them as at that age they start to learn negative life experiences from the environment around them,” said Ms Suparat.

“When that time comes we will ask the mother to have a relative pick up the baby. If there is no one to look after the baby we will have them raised in an orphanage or a temporary foster home while the mother serves out her sentence.

“We have a well-organized system here, but we can’t make any more improvements until we have more space.

“This whole facility was intended for male prisoners only. The female zone occupies a small part of that already overcrowded space.

“We desperately need a completely separate place for mothers and babies. Young children need to receive good care in order to become normal young adults without any stigma attached to their upbringing,” Ms Suparat concluded.

NO RESERVATIONS OVER NEW ‘NEIGHBORS’

Safia Manabutra, a 57-year-old resident at Baan Bang Jo, where the new prison will be built, told the Gazette that she has no reservations about the new mega-prison being built in her neighborhood.

“My house is only about 50 meters away from the current detention center. During the week I

often see the inmates escorted by the guards as they come out to work in the fields,” she explained.

“I am aware that a new prison will be built here but I don’t know when it will happen. We villagers don’t have any problems with it. We go about our business and leave the government to get along with theirs,” she said.

“We’ve never been affected by the detention facility or the inmates, so I don’t see any issues in building a new prison here,” Ms Safia added.