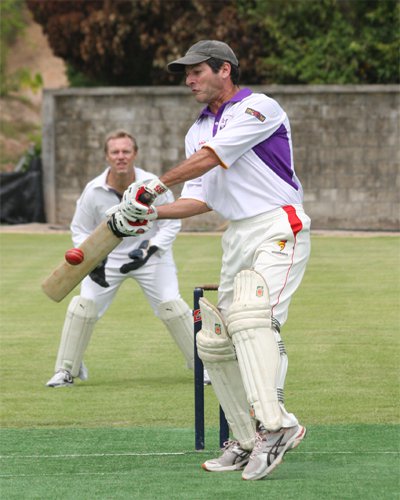 A fine display of strength and skills was exhibited by the Lomas (rugby) and Leopards (cricket) for spectators in their finery, who had gathered as part of a grand ceremony that announced the ACG’s arrival to the world of sport.

The match pitted Patong against Laguna with both teams fielding players from other league clubs in a T20 match that presented plenty of action and a number of unorthodox dismissals. Indeed, one in particular may be the very first of its kind in the history of cricket.

Patong won the toss and decided to post a total for Laguna to chase. Danny Hyams and Seemant Raju were nominated as the opening pair, both striding out to the center to get the score rolling. But it wasn’t long before Hyams (5) hobbled back to the pavilion with a damaged calf muscle.

Raju top-scored for Patong with 23 runs before losing his wicket to a fine catch by Paresh Borkar at third man just before the drinks break.

It was the dismissal of Rishi Sadarangani later in the game that had officials reaching for the rule book. Uncomfortable with his bat, Sadarangani exchanged it for the infamous “mongoose”, a weapon with shortened blade and elongated handle – designed for “slogging”.

With the overs counting down, Sadarangani wound up for a second delivery from paceman Roshan Jayasuria, but a mistimed swing caused his timepiece to fall off and he could only watch as it dislodged the bails. The action was noted as “hit wicket” and the ever-smiling Sadarangani returned to face his team mates with his biffing strap in tatters.

The only other batsmen to reach double figures were Ian Lenton (14), Neil Quail (13), Anil Rawat (14) and Dean Noble (16). Remarkably, Noble was also dismissed “hit wicket” when he fell back on to the stumps after suffering a glancing blow to his cheek attempting to hook a short-pitched delivery from Val Guiraud. Some would say a less than full delivery is a fast bowler’s dutiful response to being knocked for six, a feat which Noble had achieved with the previous ball drom Guiraud.

The unusual day’s play continued when Laguna opener Virender Kumar was dismissed, caught at gully by a stunned Pat Cotter off the very first ball of the innings. Out for a golden duck off Kishor Jhagta’s bowling, Kumar trudged back to the pavilion and was replaced by Jayasuria who immediately imitated his predecessor’s shot, but this time the catch was held by Rawat at cover. Both teams it seemed were in shock although Patong a little more jubilant as Michael Ayling approached the crease to face the dreaded hat-trick ball. Ayling survived, but not for long when in the next over he was caught behind to leave Laguna three wickets down for only eight runs.

Burger Marx (18) and Ryan Dunn (59 not out) took advantage of Patong’s complacency and not only prevented a further collapse, but turned the game into a challenge once again. Marx’s efforts ended in the eighth over with the score on 47 which brought Khan to the middle. Picking his shots beautifully, Khan gave an exhibition in twenty over batting and his partnership with Dunn of 97 runs eventually sealing Patong’s fate reaching the target of 136 in the 18th over.

This weekend sees the return of the Island Furniture 40 over league with Liquid Lounge Lizards and the Leopards hunting for their first victory of the season.

The Phuket Gazette is the Official Local Media Partner of the ACG.