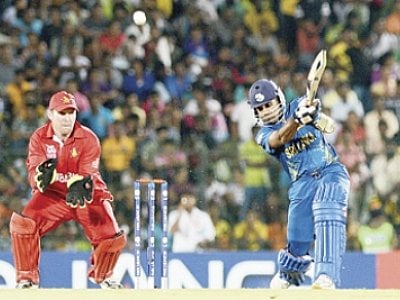 PHUKET: THE ICC World Twenty20 started in Sri Lanka on Tuesday and runs until October 7. The fourth edition of the tournament features ten ICC full members and two other ICC members who had to qualify for the tournament.

India, England and Afghanistan are in Group A. Ireland are in group B with the West Indies and Australia. Group C consists of Sri Lanka, South Africa and Zimbabwe, while Pakistan, New Zealand and Bangladesh are in group D (click here for fixtures).

The top two teams from each group will proceed to the Super Eight Round.

The current holders are England who defeated Australia in 2010.

Teams and players to watch.
Group A: England – The holders are missing enigmatic batsman Kevin Pietersen, who was voted player of the tournament in the last World Twenty20. In the absence of Pietersen, Eoin Morgan has come to the fore of the team and his form in the tournament could decide how far England progresses.

Group B: West Indies – If their batsmen are in the mood, the big hitting West Indies could upset a few teams and even get to the final.

Group C: South Africa – Jacques Kallis, AB de Villiers and opener Richard Levi are more than capable of scoring runs. Jacques Kallis, 36, may use the fact that this could be his last World Twenty20 as an incentive to push the team all the way.

Group D: Pakistan – One of the greatest, if not the greatest, of the Twenty20 nations. Reached the final in 2007, won the tournament in 2009 and were knocked out by Australia in the semifinals in 2010. Pakistan’s captain, Mohammed Hafeez, is one of the best one-day bowlers in the world and an outstanding opening batsman.

Phuket Sports: Premiership review
The Premiership played out another cracking weekend of football with its usual side show of controversy.

The match between QPR and Chelsea was the first time Anton Ferdinand and John Terry had crossed paths since Terry was acquitted by a magistrates court of racially abusing Ferdinand.

Ferdinand, who refused to shake Terry’s hand, also refused to shake the hand of Ashley Cole – a character witness for Terry in the trial. Terry still faces an inquiry by the FA over the same incident. The players seemed to be distracted by the pre-game handshake incident and the match finished 0-0.

Arsenal swept aside newly promoted Southampton 6-1. Arsenal’s attacking flair was too much for Southampton with Lukas Podolski, Santi Carzola, Gervinho and left back Kieran Gibbs being the stand out players.

Liverpool’s poor start to the season continued as they struggled to a 1-1 draw against Sunderland.

Everton played Newcastle in the Monday night game, and the topic of goal line technology was raised again as Everton had a perfectly good goal disallowed. The match finished 2-2 as Newcastle substitute, Ba, scored his second goal of the game in the last minute.

This weekend sees Liverpool play Manchester United on Sunday in a match that could be overshadowed by the same handshake debacle of last season involving Luis Suarez and Patrice Evra.

Arsenal have a chance to really prove their attacking credentials when they take on Manchester City tomorrow.

Aston Villa will be hoping Southampton are still suffering after their heavy loss to Arsenal when they meet today.

In news closer to home, the Football Association of Thailand (FAT) could be forced to disband following allegations of corruption, a government spokesperson investigating the association last week said in an interview with Reuters:

FAT’s President, Worawi Makudi has been accused of corruption in the past. In 2011, FIFA accused him of spending US$860,000 of football development grants for projects on land he owns. He was eventually acquitted.