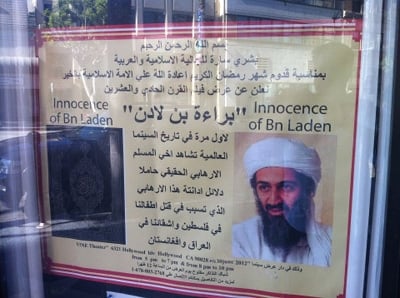 In the southern port city of Karachi, at least twelve people were confirmed dead with over 110 injured as protesters burnt two banks, five cinemas, and a number of shops and vehicles. Protests reached the Chief Minister’s house where three police vans were also set on fire.

At least two others, including a private TV channel employee, were also killed in Peshawar, the provincial capital of Khyber Pakhtunkhwa, where protesters ransacked the Chamber of Commerce and burnt two more cinemas.

Angry demonstrators also clashed with police in several areas of the country’s capital, Islamabad. Protesters have been pushing to enter the city’s red zone toward the U.S. consulate, but high security measures have included tear gas to disperse the crowds.

Other affected cities include Lahore and Rawalpindi.

The recent widespread protests in the Middle Eastern region have been sparked by a 14-minute English-language trailer for an amateur movie called “Innocence of Muslims,” reportedly produced in California by a U.S. citizen. It is believed that an immigrant from Egypt identified as Nakoula Basseley Nakoula, a Coptic Christian, produced the movie.

The low-budget amateur movie, which supposedly cost just $5 million to make and had only 59 people appearing in it, with a Hollywood Reporter describing it as ‘unprofessional’, has brought harsh criticism from Muslims in several locations around the world.

The film depicted Islam’s Prophet Muhammad as a fraud and feckless philanderer who approved of child sexual abuse. It also includes other insulting claims.

In a statement obtained by CNN, the film’s 80 cast and crew members disavowed the film, saying: “The entire cast and crew are extremely upset and feel taken advantage of by the producer. We are 100% not behind this film and were grossly misled about its intent and purpose.”

It further explained, “We are shocked by the drastic re-writes of the script and lies that were told to all involved. We are deeply saddened by the tragedies that have occurred.”

The fresh violence captured worldwide attention after United States ambassador to Libya Christopher Stevens and three other diplomats were killed on Tuesday night during an attack against the U.S. Consulate in Benghazi. The attack also injured three other diplomats, and left others wounded.