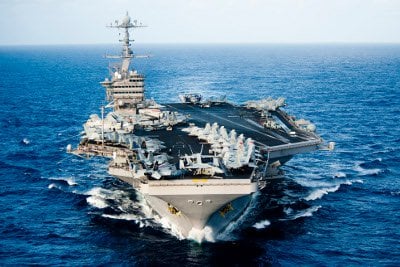 PHUKET: The American aircraft carrier USS John C Stennis (CVN-74), dispatched four months ahead of schedule back in August, will arrive in Phuket early next month along with two US warships and 3,500 sailors.

The Washington-state-based aircraft carrier’s current mission is to ensure security and stability in the “vital Asia-Pacific region”, according to the ship’s Facebook page.

The departure of the ship comes on the heels of rising tension between Japan and China over the sovereignty of the disputed islands known as Diaoyu in China and Senkaku in Japan.

However, Matt Plouche and Charles E Stehwien from the US embassy in Bangkok met Phuket Governor Tri Augkaradacha yesterday to formally confirm that the US Navy ships will be anchored in Ao Makham Port from October 7 to 10.

“All 3,500 sailors will be rotating off the ship to spend time in Phuket, especially Patong,” said Phuket Tourist Association Vice President for Marketing Bhuritt Maswongsa.

Heading back to the Arabian Gulf, the ship will be spending time in the US 7th Fleet area of operations “engaging with some of our country’s important allies and to experience [other] unique cultures that can only be found in this part of the world,” said RDML Chuck Gaouette, Commander of the John C. Stennis Strike Group 86.

According to the USS John C Stennis‘ Admiral video blog, the sailors are looking forward to the break in routine.

“Getting off the ship and, you know, seeing new sights, places I’ve never been,” said one sailor in the blog who plans to relax, put his feet up and catch some sun while in Phuket.

“It just gives us something to look forward to,” said another crew member.

Due to the strict rules given to sailors on shore leave, there should not be too many problems involving them while they are on Phuket, said Mr Bhuritt.

“It’s good that the ships are coming to Phuket as it supports our tourism. We expect each sailor to spend about 10,000 baht a day,” Mr Bhuritt added.