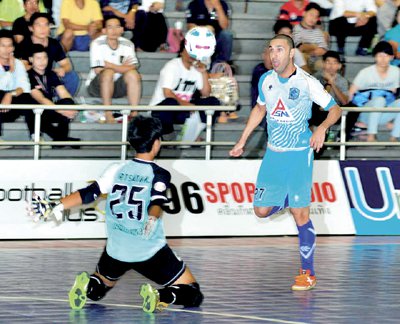 Speaking on the phone from Bangkok, the team’s secretary, Samak Rattanatilok na Phuket, informed the Gazette that the team has finally received confirmation from the TFL about the season’s unofficial start in October.

Mr Samak was in the capital to attend a meeting with TFL team representatives and league organizers on Wednesday.

“We will start to finalize contracts with our Thai players, so that we can start to prepare for at least two friendly matches next month.

Asked about the status of the team’s star striker, Rogerio Moreira, Mr Samak was adamant that the Brazilian, who helped Phuket win the CAT national championship last year, would return to Thailand to play for the team.

“Rogerio will begin his contract in November, when the season officially starts. Meanwhile, we will finalize our Thai lineup,” he said.

Mr Samak added that Phuket United are in negotiations with another high-profile Brazilian player, Jackson Santos.

Santos, who previously played for ‘I am Sport FC’, told the Gazette that he really wants to join Phuket United alongside good friend Rogerio, believing this would enhance their performances for the team.

Rogerio echoed the sentiment, saying, “If Santos is signed to Phuket United, we would play really well together.”

Though Rogerio had recently signed a contract with the “Andaman Pearl” for the 2012-2013 season, an indefinite season delay had cast a shadow of uncertainty over the status of many of the league’s high-profile foreign talent, including Moreira and Santos.

“After our [Phuket United’s] successful qualification campaign at the end of last year, my wife and I had a conversation with the team president to negotiate my contract for the 2012-2013 season.

“I explained to him that I am not willing to leave my wife behind in Brazil [to play the season in Phuket], and I took it that he understood and accepted this. But after returning to Brazil during the break, I didn’t get any clear, concrete confirmation about my contract or starting date,” he told the Gazette.

Following that conversation, the Gazette contacted the club’s acting president, Preechawut Keesin, who said, “Due to the delay for start of season, we could not confirm anything for sure… now that we have official confirmation about the start date, we’re ready to start finalizing our squad.

“I can’t give any specific details about negotiations with Rogerio and Santos right now, but can say that they are key players that we are looking to secure for the team.”

Mr Preechawut added that the team will soon open an office across the street from Surakul Stadium, near the recently-opened Phuket FC office.

The team’s home matches will be held in the recently-built, air-conditioned 4,000-capacity gymnasium at Saphan Hin, which was completed ahead of the National Youth Games held in Phuket in May-June.

Phuket United are among 16 teams nationwide who will compete in the league.

Futsal World Cup draw
The organizers of the FIFA Futsal World Cup were left red-faced after the draw for the tournament, which will kick off in November in Thailand, was marred by confusion over rules, forcing the officials to make a revised draw (click here for draw results).

Four-time champions Brazil were originally drawn in Group C alongside Asian champions Japan, Portugal and Colombia, but the rules state that two teams from the same continent cannot be in the same group, with the exception of Europe, which have seven participating teams in the 24-team event.

The officials became aware of the mistake only after the initial draw was completed. After a 10-minute delay, the official who conducted the draw returned to the stage and explained the error.

African champions Libya were then assigned to Group C in place of Colombia in what was widely regarded as the most difficult-looking group, while the Colombians moved to Group F with Russia, the Solomon Islands and Guatemala.

Hosts Thailand are in Group A, which also features Ukraine, Costa Rica and Paraguay. Group B consists of two-time champions Spain as well as Iran, Panama and Morocco.

Argentina were slotted in Group D alongside Mexico, Italy and Australia, while Egypt, Serbia, the Czech Republic and Kuwait are in Group E.

Thirachai Wuthitham, the chairman of the National Futsal Development committee believes that Thailand are in a difficult group, given that Costa Rica are the Concacaf champions, while Ukraine and Paraguay stand at the eighth and ninth spots, respectively, in the world rankings, both above the Thai side in 11th place.

Phuket FC Coach: “Anything can happen’ tonight against Korat