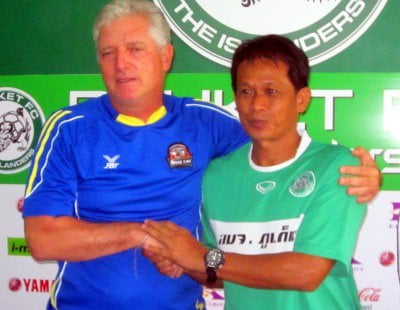 PHUKET: Fans of Phuket FC are confident that their side will not walk away without at least a point in tonight’s home football match against a slightly better-ranked, yet tired and injury-riddled Nakhon Ratchasima FC side.

To be played at Surakul Stadium in Phuket Town, the 25th fixture of the season will kickoff at 6:30pm.

The Islanders’ Head Coach, Narong “Noi” Arjarayutt, told a press conference last night that he will not underestimate the Isarn opponents, who are ranked eighth – two places higher than Phuket – in the Yamaha One league (Thai Division 1).

Coach Noi’s cautious comments were made in light of Phuket having home advantage and the fact that the Korat Swat Cats have played 10 matches in the past month – six more than the usual schedule due to a hectic cup schedule – with up to seven key players unavailable through injuries.

“Anything can happen in football. Teams can win even on a bad day. Korat is a fine team; their coach, players and tactics are all good, so we will not take them lightly,” he said.

“We will play defensively. We’re going to start off in a 4-2-3-1 formation and adjust accordingly depending on the flow of the game,” he added.

Phuket were victorious at the two teams’ first meeting in Nakhon Ratchasima in March – the Islanders’ first win of the season.

However, Coach Noi pointed out that his team is also not in ideal form.

“We will be without three key players. Defenders Nenebi Sylvestre and Wuttipong Sittitanyakit as well as midfielder Yutthana Jongnok who are all banned for this match due to the accumulation of too many yellow cards.

“However, I’m excited that midfielder Marcio Santos can play,” he told the Gazette.

Santos, from Brazil, missed last week’s match against Ratchaburi due to a match ban after also accumulating too many yellows in previous matches.

At the press conference, Korat’s Brazilian coach Reuther Moreira was cleverly evasive when the Gazette asked him about his strategy in tonight’s match.

“I have about five or six key systems in my arsenal. Some of Phuket’s players, my old players, know these… You and everyone else will see my strategy tomorrow when the game starts,” he said.

Moreira, a respected figure in football, has a 43-year history in the game and has coached several champion players and teams in Brazil, as well as Thailand over the past decade.

Notably, he was the mentor and former coach of Phuket’s Santos, introducing the young Brazilian to the Thai football league several years ago.

“Santos is like a son to me. He is a good player and Phuket is lucky to have him,” Moreira told the Gazette.

Another key Phuket player that Moreira knows well, and who knows Moreira likewise, is recently signed defender and alternating team captain Nontaphan “Berm” Jiensathawong, who was previously coached by the senior Brazilian at Muangthong United.

“I remember your deadly free-kick well, and would happily welcome you to Korat if you should ever want to rejoin me,” Moreira was later heard telling Berm.

With thundershowers forecast across only 40% across the island, a large turnout is expected for tonight’s match.

In addition to thousands of home supporters, hundreds of Korat Swat Cats are expected to form a reasonable-sized away contingent, who will most likely set up base under the southern end of the covered seating section.

The Isarn side, promoted to Division 1 this season, currently enjoy the largest fan base in the league.

Despite the relatively clear forecast, spectators concerned about rain are advised to arrive an hour early, by 5:30pm, to secure covered seating.

For those who can’t make it to the stadium, the match will also be broadcast live on national cable, True Visions Channel 74.