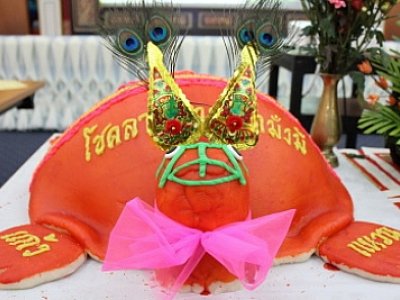 PHUKET: Phuket City Municipality has organized a wide range of activities for the annual Por Tor festival from September 2 to 15, including colorful street processions tomorrow and next Sunday.

Promoted internationally by the Tourism Authority of Thailand (TAT) regional office in Phuket Town, the Por Tor festival has its roots from the Chinese “Spirit” or “Hungry Ghost” festival (zhong yuan jie), one of the most important ancestor worship events on the Chinese lunar calendar.

In the version adhered to in mainland China, these ghosts are believed to be the ancestors of those who did not pay to honor them after death, or those who were never given a proper send-off to the next world. They have very thin, long necks because they have not been fed by their families, or are unable to swallow as a punishment for wicked deeds during their lifetime.

“The Por Tor festival has a long history and has been celebrated by many generations,” said Phuket City Deputy Mayor Kawee Tansukatanon.

“Por Tor is usually held during the ninth month, which is the month that the door to the world of the living opens for ancestors to come back and visit theirs families. But in addition to the ancestral spirits, ghosts that have no families will also come and wander about,” he explained.

One of the most important offerings are red turtle cakes: Aung Gu (small turtle) and Tua Gu (big turtle).

“In China, turtles symbolize long life and good health, since the turtle can live for a long time. Red is also the color of good fortune to the Chinese. Therefore, using a red turtle as an offering to the spirits of our ancestors, as well as to the spirits with no families, is believed to lengthen people lives,” Deputy Mayor Kawee added.

This year’s Por Tor festival events will be held from tomorrow through September 15, with big street processions on successive Sundays: September 2 and 9.

“The September 2 procession will start at 10am at Queen Sirikit Park on Thalang Road. It will pass along Thalang Road, Yaowarat Road, Phang Nga Road, Standard Chartered Bank Junction, and Rassada Road before reaching the municipal market on Ranong Road at around 12:20pm,” said Mr Kawee.

“The following Sunday, September 9, there will be another procession starting at the Saphan Hin Mining Monument at 9am. The parade route will be along Phuket Road, Kra Road, Takuatung Road and the finish at the Bang Neaw Shrine [also called the Por Tor Kong Shrine] on Phuket Road.”

Por Tor festival activities will be held at the following locations: