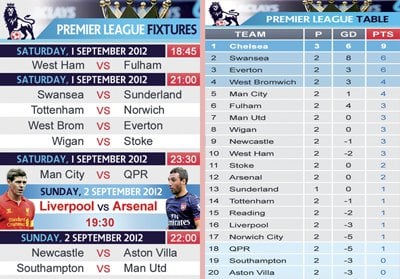 PHUKET: Last weekend was the second week of the new football season and even though it is still early, a familiar pattern seems to be emerging.

Manchester City and Liverpool played out a thrilling 2-2 draw with Martin Skrtel the hero and villain of the game.

The Slovakian international defender opened the scoring for Liverpool, but all his good work was undone with a sloppy back pass that City’s Tevez pounced on in the 80th minute.

Liverpool looked more like the passing team their manager Brendan Rodgers wants them to be. It will be a difficult season for Rodgers and it will take time for him to implement his footballing footprint on the team, but the signs against Manchester City looked positive.

Michael Laudrup continued his dream start as Swansea manager with a 3-0 win over West Ham, which puts his team top of the league with eight goals in two games.

Wayne Rooney suffered an injury in Manchester United’s 3-2 victory over Fulham. The England striker was caught accidentally by Hugo Rodellaga on the thigh as he tried to block a free kick. The gash is so deep that he could be ruled out for up to two months. Van Persie scored his first Manchester United goal.

Fernando Torres and Eden Hazard terrorised Newcastle’s defence to ease the London team to a 2-0 victory. Newcastle headed back to the Sports Direct Arena hoping that Ibrahim Ba and Pappis Cisse start to click as a forward pairing sooner rather than later.

Other results from last weekend. Norwich and QPR 1-1, Tottenham and West Brom 1-1, Arsenal and Stoke 0-0, Southampton lost to Wigan 2-0 and Aston Villa capitulated against an impressive Everton side 3-1

The pick of this weekend’s games see Liverpool play Arsenal on Sunday. Arsenal are yet to score in the league since they sold Van Persie and Liverpool will want to push on from their impressive draw against Manchester City.

Aston Villa travel to Newcastle hoping to secure a victory that will move them off the bottom of the table.

Once in a Blue Moon