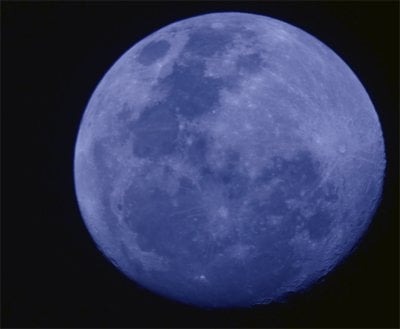 PHUKET: The National Astronomical Research Institute (NARIT) has announced that the rare lunar event, known as a ‘Blue Moon’, is scheduled to occur tonight.

NARIT Deputy Director, Dr. Sarun Posayachinda elaborated that a Blue Moon refers to the second full moon within a given month. A full moon generally takes place once a month.

This occurrence happens approximately once every 2.7 years. The last occurrence of a second full moon in a calendar month was on New Years’ Eve in 2009. After tonight’s event, the next Blue Moon is due to take place on July 2, 2015.

Tonight’s moon will appear over Phuket at around 6.18pm local time and reach its full phase at 8.57pm and viewing conditions appear optimal.

A Blue Moon is blue in name only, but very rarely, the moon can appear blue when a volcanic eruption, forest fires or dust storms send fine dust into the atmosphere.