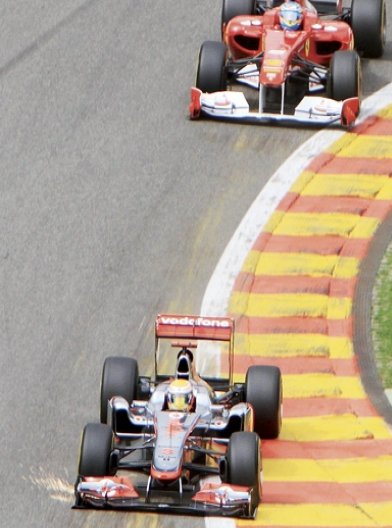 PHUKET: This weekend Formula 1 is back from an agonizingly long half-term break. And it’s Spa – one of my favorite tracks in F1 as it tests drivers more than any other in the world.

Along with Monza it is the fastest circuit of year because the corners need to be taken flat out.

The drivers will corner Eau Rouge and Blanchimont at over 330 kilometers an hour to get a fast run onto the straights after them.

Traction is vital at places such as La Source hairpin, where tyre grip is key to a clean exit. In Eau Rouge, each front tyre is subjected to a peak vertical load exceeding 1000kg. The tyres take a beating.

Having negotiated the La Source hairpin, drivers race down a straight to where the track crosses the Eau Rouge stream before being launched steeply uphill into a sweeping left-right-left set of corners culminating in a blind summit, where drivers cannot be quite sure where they will land.

Raidillon demands enormous skill to negotiate well. It is critical too, because the Kemmel Straight that follows produces excellent overtaking opportunities for the best drivers at the Les Combes corner.

A less than perfect job tends to result in a very heavy shunt as the rear of the car takes over. Jacques Villeneuve describes as “My best-ever crash” his spectacular 1999 exit in qualifying, swiftly followed by his team-mate’s copycat accident.

The left-hander at Blanchimont is one of the most fearsome turns in F1.This is the final sweeping corner of the track before the Bus Stop Chicane, which leads to the pit straight. This turn is unforgiving, and has seen many big accidents.

The run-off area is narrower than in comparable turns on most other circuits, and just to focus the mind, behind the barriers lurks an 8 meter drop.

Despite the straight-line speeds in Spa, the cars run a medium down-force set-up to optimize grip through the fast corners.

The cars are at full throttle 75 per cent of the time, which quickly builds tyre temperature, particularly if an aggressive camber set-up is used to maximize grip.

Pirelli has opted to provide the hardest tyres of the season. Pirelli motorsport director Paul Hembery said “The nomination of hard and medium tyres will allow drivers to push hard from start to finish, which is what Spa was designed for.”

With all the compressions, getting the ride height and suspension travel correct is vital as otherwise the cars could bottom out at some parts of the circuit.

The Ardennes Forest has very unpredictable weather and in the old longer circuit there were often areas where it was raining, and other parts where the sun was shining and the track was completely dry.

In those days it was the most dangerous race track in the world. It is somewhat tamed now. But it still has a wet and dry side, and is still very special and exciting.

Every driver would like to win at Spa; it is the drivers’ circuit. But who will take the big points? I shall chance my arm and say that I think Hamilton will be a very strong contender, as will Raikkonen and they both need the points to claw their way to the front of the Drivers’ Championship. Rosberg, Schumacher, Grosjean and Button could be there too. It looks hard for Ferrari and Red Bull to shine here, but who knows?

The race is on Sunday at 7 pm, and the practice is at the same time on Saturday. It is shown live on the Big Screen at The Green Man, Chalong. Click here for more information.