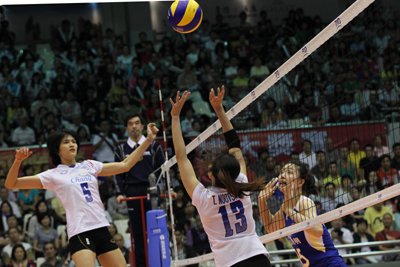 PHUKET: Thai ladies continue to live up to their reputation as some of the world’s best ball control artists, with the final round of the Féderation Internationale de Volleyball (FIVB) 2012 Grand Prix, providing the latest stage for them to demonstrate their considerable skills.

Considered the women’s equivalent of the FIVB World League of mens volleyball, the annual tournament is one of the sport’s most prestigious events, second only to the FIVB World Championship.

Starting June 8, the Prix’s 20th edition was contested by 16 qualifiers and co-hosted across 10 nations: Thailand, Macau, China, Chinese Taipei, Japan, South Korea, Serbia, Poland, Brazil and Dominican Republic. The final round, being contested among six finalists in Ningbo, China, starts today and is set to conclude on July 1 (see fixtures below).

As one of the six finalists, Thailand has already matched their best-ever finish of 6th place, which they achieved in last year’s Prix, and have the opportunity to set a new benchmark.

Ranked 12th in the world – two spots up from last year – the Lady Elephants stood out from among the world’s best early on in their 10th appearance, winning 7 of their 9 matches in the opening stages.

Among Thailand’s victims were Argentina (world 18th) and Puerto Rico (19th) – both losing to the Thais twice – as well as Japan (3rd), the Dominican Republic (9th) and Serbia (6th).

Thailand’s two losses in pool play were meted out by Asian rivals China (5th) in four sets, and the world’s uncontested best, the USA, in three strait sets.

An impressive sets won-lost ratio of 2.2 during the pool stage was third best behind USA (13.5) and China (3.0). They also enjoyed a very respectable points-won-over-lost ratio of 1.120 (709/633). The fourth-place finish at the end of the pool stage sealed a place in the final round for the second consecutive year.

Most of Ms Sittirak’s 122 points were from spikes (110). In this category she was outdone only by Italy’s Ortolani Serena (123), who was also the leading scorer overall with 146 points.

Blocking was one area the Thais showed a weakness in. Their best blocker, Kanthong Malika, ranked 20th with a per-set average of 0.47 blocks after a total 100 attempts.

As for serves, Tomkom Nootsara finished sixth with 13 aces and just 7 faults in 126 attempts.

With a worst-case scenario of finishing sixth, the pressure is now on for the Thais to do better than last year’s finish.

Following is the final round schedule of matches, listed in local (Phuket) time:

For all the latest updates, scores and stats click here.