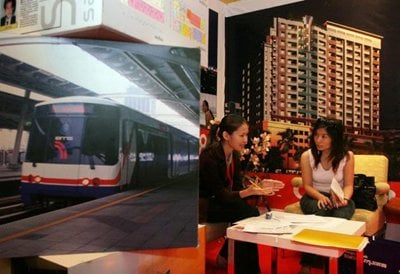 PHUKET MEDIA WATCH
– Thailand news compiled by Gazette editors for Phuket’s international community
Boom could bust in condo markets
Phuket Gazette / The Nation
PHUKET: A property bubble is forming in Bangkok, Phuket and other Thai cities, as well as in Vietnam and Myanmar, partly because of euphoria over the forthcoming launch of the Asean Economic Community, an economist has warned.
But meanwhile a senior banking executive is playing down such fears, saying no bubble has been detected. [See the business section of the Phuket Gazette this Saturday, June 30, for an in-depth analysis of the local property market].

Sompop Manarungsan, president of Thailand’s Panyapiwat Institute of Technology, said on Tuesday that concomitant with the debt crisis in Europe and the collapse of the property sector in Spain, there are signs of a property bubble in Bangkok, especially in the market for high-rise condominiums along Sukhumvit Road,

He pointed to the heavy advertising for condos in all media, particularly pamphlets and new media channels such as text messaging.

The heavy advertising suggests that condominium developers are finding it hard to get buyers, he said, belying the conventional view that the market is not in a bubble.

“I live on Sukhumvit Road. Over the past 10 years I have witnessed many condos spring up. Those who have older condos are moving to new condos, leaving the old ones empty,” Sompop said.

He said he was not sure whether there are new buyers, and suggested there might only be small groups of people buying condos for speculative purposes, hoping to rent to foreigners or certain groups of Thais.

Land developers may be overly optimistic that large numbers of people will move to condos along mass-transit routes, he warned.

“We should be aware that a burst of the property bubble would drag down banks that have lent to land developers and home-buyers,” he said.

The bursting of the property bubble in Spain has created huge trouble for both banks and the overall economy, while the sub-prime-mortgage crisis in the United States sparked the global financial crisis in 2008, Sompop said.

He said authorities such as the Bank of Thailand had to put in place preventive measures before this small bubble grew out of control.

Land and property prices are booming now in key provinces such as Khon Kaen, Udon Thani and other places as businesses and individuals believe that Thailand will benefit greatly from the Asean single market.

Land prices in Yangon, the commercial center of Myanmar, are soaring at a faster pace than economic fundamentals, warned Sompop. People in Myanmar believe that political reform will bring economic prosperity, causing them to speculate on land, he said.

Land and property prices in Vietnam have been increasing for a long time, leading to rising inflation and higher business costs.

Trouble in other Asean countries such as Vietnam or Indonesia would adversely affect the Thai economy, he said.

He also warned of the threat of political conflict between the red and yellow shirts, which could result in an economic-policy vacuum at a time of high global economic volatility.

The high cost of populist policies will also strain the government’s ability to make productive investments, he said.

Praphan Anupongongarch, executive vice president at Thanachart Bank, however, said his bank did not yet see clear signs of a condo-market bubble.

“If demand is dropping because consumers are worried about the European crisis, there is little chance of a condominium bubble occurring,” Praphan said.

Some projects may not be attractive because of their poor locations, he said.

In a related development, the state-owned Secondary Mortgage Corporation (SMC) signed a memorandum of understanding to buy mortgages worth Bt1.85 billion from Kasikornbank.

The agreement aims to provide liquidity to banks and offer opportunities to home-buyers and investors in SMC bonds, its executives said.
WHSmith opens its doors in Asean
The Nation
Kuala Lumpur and Langkawi airports will be home to iconic United Kingdom-based retailer WHSmith when its first stores in Asia open their doors later this year.

WHSmith chief executive Kate Swann said WHSmith stores will open this summer in the airports, offering customers a wide selection of books as well as a wide range of magazines, stationery, travel accessories and convenience products.


Kingdom ‘must rely on own strengths’ amid euro crisis
Phuket Gazette / The Nation
PHUKET: The European crisis could drag on for four or five years, driving down Thai exports and whipping up stock and bond markets, an academic said on Tuesday.
“The euro could be worthless paper as more money is unlikely to solve problems until troubled countries like Greece, Spain and Italy reform their economies,” said Sompop Manarungsan, president of the Panyapiwat Institute of Technology.

The European Central Bank will likely inject more money into the crisis countries in the euro zone, which will weaken the currency, while the US Federal Reserve may pump liquidity into Europe, since any trouble there would also hurt the US economy, he said.

Thailand’s exports will be buffeted by both the crisis in Europe and the slowdown of the global economy, he said. As the credit ratings of major banks in Europe have been downgraded by Moody’s Investors Service, trade finance will dry up.

Since Thailand’s exports in the first five months were still in negative territory, they need to expand by 30 per cent in the second half to achieve the Commerce Ministry’s growth target of 15 per cent for the full year. However, if the country can achieve export growth of 8-9 per cent, that will be all right, Sompop said.

The Bank of Thailand will face a challenge in managing capital flows, which are expected to be two-way. The likely scenario is more inflows than outflows. Swift inflows could have a devastating effect on the exchange rate and capital market, he said.

Private investors are wrong to ask the government to establish a fund to shore up stocks, as that would distort the market and the government would not have enough funds to intervene in the market, he said.

Thai authorities should watch whether the European crisis rattles Hong Kong and Singapore, which are the financial centers of Asia. Indonesia, which depends on bank loans from Europe, may also be in trouble, Sompop said.

India and Vietnam, with high inflation rates, would be unable to do much to boost their economies.

“Any impact on other countries in the region will also affect Thailand significantly,” he said.

However, Thailand’s fiscal position is strong, thanks to treasury reserves of Bt500 billion and relatively low public debt. The country’s international reserves are also hefty.

“The biggest threat to Thailand is political conflict. If it escalates into violence, it will weaken the country,” he warned.

Thailand has to strive to become the hub of mainland Asean, as it could do well in logistics, road and air transport, and communications, Sompop said.

“We must make Bangkok the capital of mainland Asean or the Mekong region.”