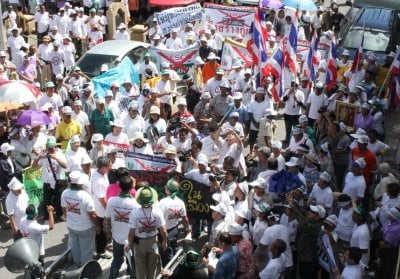 After assembling at Rama X Park (Suan Luang), the protesters marched through the streets carrying signs with slogans reading “Tesco ruins our life in Phuket Town”, “We don’t want Tesco”, among others.

In accepting the complaint, Gov Tri told the protesters he always did his best for the people of Phuket.

He added, however, that he would have to forward the letter of complaint to Phuket City Mayor Somjai Suwansupana, whose administration has authority over development issues inside city limits.

Tesco Lotus has already acquired 23 rai of land for the project, but has yet to complete its Environmental Impact Assessment that must be filed with building permit application.

The protesters told the Phuket Gazette they wanted to take their protest to the streets before the EIA is approved.

The Gazette understands that the final project would be similar in size and scale to the Tesco Thalang mall in the north of the island.

The protesters said they had the support of market vendors at two Phuket City Municipal Markets as well as 18 local communities spread across the city.

“We found out that Tesco Lotus will be building a branch on Bangkok Road. It will directly affect all of us,” said Teeraphong Aiumanan-jaroen, representing the vendors at the Municipal Market on Ranong Road.

“Stall vendors and many of the smaller stores won’t be able to compete, as people will buy stuff from the bigger store. It will be a domino effect; one-by-one we will all go out of business,” he said.

“I am also concerned that the lifestyle of the Phuket Town community will be changed. The culture and traditions of Phuket people won’t be the same,” Mr Teeraphong said.

Mr Teerapong also believes that the outlet would increase traffic congestion in the area.

“If a Tesco Lotus store is opened, the environment in the area will also be ruined,” he said.

“As the representative of Phuket People Protest Against Tesco Lotus Network, I would like to oppose the plan for Tesco Lotus to open a branch in Phuket Town,” he said.

The phenomenal growth of Tesco Lotus in recent years has spawned other protests in the past, especially opposition to smaller retail outlets in Wichit and Cherng Talay.