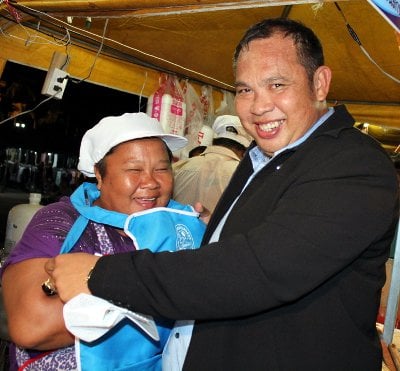 PHUKET: The first annual “Chalong Food and Entertainment Festival” kicked off in Phuket last night, and will continue to offer a wide variety of food and beverage options, as well as staged entertainment through to Monday night.

The five-day event is open from 4pm to midnight in the field opposite Wat Ladthi Wanaram (“Wat Tai”), on Chao Fa East Road in Chalong.

Mayor Samran, who knows his way around a wok, also fried up a huge serving of Hokkien noodles, which were then shared with fellow Thai cooks from Chalong.

Tonight’s entertainment will include the opening round of the “Chalong Got Talent” [sic] competition, while tomorrow will see the start of the “New G bloods we’re just say no” [sic], described as an international singing contest aimed at keeping kids off drugs.

Eighty food vendors have set up stalls at the event, which is intended to promote local food and hygiene standards.

Cristiano Ronaldo: “It is the most difficult group in my opinion