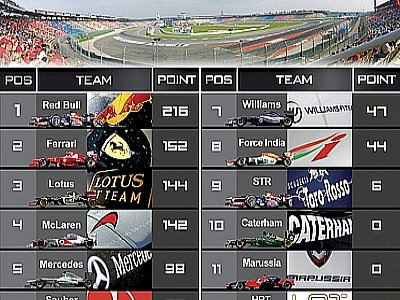 PHUKET: The next race will be at the Hockenheimring and will mark the half way point of the F1 season, so it’s a good time to sit back and review where everyone is.

At the start of the season, McLaren looked unbeatable except by error. They seemed exhausted by Silverstone.

Why? Because Ferrari and Red Bull had upgraded their aerodynamics, and the sheer power of the Mercedes engine was not enough for McLaren. It’s about down-force, and Silverstone is one of the fastest tracks of the year, and notoriously destructive of tyres, which is why Pirelli brought their new hard tyres to the GP.

Red Bull introduced refinements at Valencia, and at Silverstone had a new exhaust pipe mantle, while Ferrari had a whole new wing design. Some say that McLaren erred in designing a car with a lower nose than their rivals, as the higher chassis give more opportunity for aerodynamic development.

And, while Lotus, Red Bull and Ferrari seem to have tamed the neurotic Pirelli tyres, McLaren is still struggling. Jenson Button, in particular, cannot get his front tyres to temperature.

The drivers’ title looks likely to be between the Red Bulls and Fernando Alonso.

For McLaren to challenge they need to show real development and soon.

They have an upgrade for Hockenheim. Let’s hope, because McLaren has a mountain to climb.

Red Bull is on a roll, but they desperately want their golden haired Sebastian Vettel to win, not dispensable Mark Webber with his annual contracts. The team just announced that Webber’s contract has been extended for yet another year, and rumor says he drove an irritatingly hard bargain.

Ferrari is looking much better, and Massa seems to have recovered form. Lotus is the ‘nearly’ team. They came 5th and 6th at Silverstone, and are now third in the Constructors Championship. We are still waiting for them to win.

McLaren is down to the realm where it is only just possible to recover. Mercedes cannot be happy with their showing.

Sauber has been unlucky, and Kamui Kobayashi mowing down his Silverstone pit crew was a poor moment.

Williams is having mixed fortunes; Pastor Maldonado keeps hitting other drivers, but Bruno Senna is racking up a few points.

Force India is stronger than their unlucky Silverstone result shows, and they probably feel good.

None of the other teams have scored any points yet. Silverstone showed how slow the Caterham is, but HRT is at least creative, putting Pedro de la Rosa on a one stop strategy at Silverstone .

But our hearts must go out to Marussia who did admirably at Silverstone after their test driver Maria de Villota’s awful accident. Maria had what seems to be a horrible freak accident in routine testing. She has lost her right eye, and is undergoing extensive reconstructive surgery.

Hockenheimring is next. It is a technical track. The surface is slippery, making tyre choice important. Depending on the weather, it can be treacherous. There are good straights, so teams will opt for a medium down-force setting. Overtaking is difficult, with the best opportunities at the first corner and the hairpin turn.

That first corner is notorious for ending drivers’ races at the start.

Bus from Phuket to Narathiwat crashes in Phang Nga