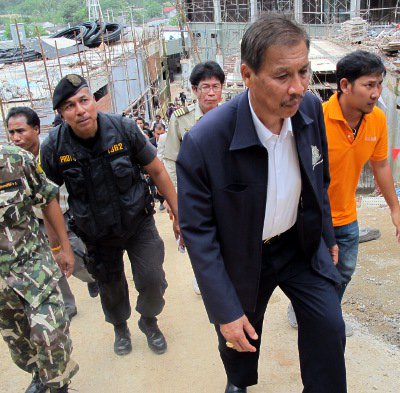 PHUKET: The owners of a Phuket beach resort project will likely face legal action for encroaching on national park land following an inspection of the site this week by the Director General of the Department of National Parks, Wildlife and Plant Conservation (DNP).

The resort is one of ten the agency will be investigating for possible land encroachment.

“In May I went to Nai Thon Beach and noticed the construction of the Pullman Phuket Arcadia Naithon Beach Resort up on the hill. I suspected the resort was being illegally built on the land. When I traveled back to Bangkok, I set up an inspection team to verify the resort’s land-use documents,” explained DNP Director-General Damrong Phidet.

During their investigation, Mr Damrong and his team discovered that 38 of the 39 rai used for the project was actually within the boundaries of the Sirinath National Park. However, three Chanote land title deeds issued to the resort for the use of 13 rai of the land had been approved by a former Sirinath National Park chief, who confirmed that the land specified was not inside the park.

“I thought I was going to have to take legal action against the former park chief, but after examining the land documents we realized that the owner asked for his permission to build the resort on land outside the park. When construction began, however, it was in a different area, that is protected land. Because of this, we will have to take legal action against the resort owner,” he said.

When project developer Wiranun Pitupakorn arrived on site during the inspection, he told Mr Damrong the resort had all the necessary land deeds and construction permits.

The company also owns the Hilton Arcadia Resort and Spa in Karon, the island’s largest resort.

Mr Dumrong advised Mr Wiranun to bring the related documents to Tha Chat Chai Police Station, where a report of the alleged encroachment was already on file.

“Unless he can prove to us that he has the legal right to use the land for the resort, we will have to file a complaint to the court in order to have a warrant issued to stop the resort construction, Mr Damrong said.

“We are now in the process of verifying Chanote title deeds of the remaining 25 rai of the resort, ” he added.

Pullman Phuket Arcadia Naithon Beach Resort is only the first of 10 hotels and resorts on Mr Damrong’s list requiring land ownership verification. By his estimates, these projects collectively represent a minimum of 2 billion baht of investment in the Khao Ruak-Khao Paeng hillsides.

“I will set up a committee to verify the land ownership documents of nine more hotels located in the area,” he said.

Any projects located in the Kaho Ruak-Khao Paeng hills are most likely illegal because the process through which it was eventually established as a forest reserve dated back to 1964. As such, any Chanote title deeds dated after that year must have been issued illegally, Mr Damrong explained.

“If we find any hotels with illegal land-use documents, we will take serious legal action against them; not just the hotel owners, but the government officers involved in the issuing process as well,” he said.

Mr Damrong plans to conclude his investigation within a month.

“Our natural resources are very valuable and should be conserved. Much of the beautiful land of Phuket has been ruined by illegal developments. Local residents and related organizations should work together to protect the natural resources of the island and restore the beauty of the province,” he said.