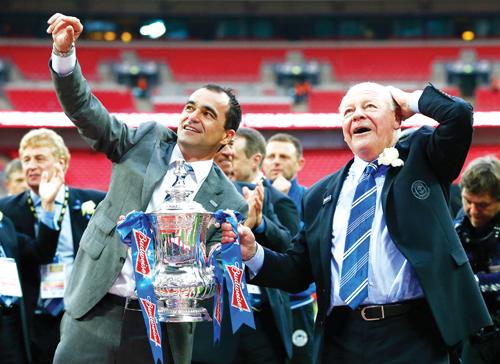 PHUKET: Wigan Athletic became the first team to be relegated from England’s top flight in the same season as winning the FA Cup after they lost 4-1 at Arsenal, with Lukas Podolski scoring twice, in the English Premier League on Tuesday.

The victory keeps Arsenal in pole position to claim fourth spot and a place in next year’s Champions League. They lead north London rivals Tottenham Hotspur, in fifth spot, by one point with the last round of games to be played on Sunday.

Wigan have narrowly escaped relegation several times in recent seasons, but their luck ran out at a rain-sodden Emirates Stadium just three days after they had beaten Manchester City 1-0 at Wembley to win the FA Cup for the first time.

“I never expected this to happen, this group of players don’t deserve this,” said Wigan manager Roberto Martinez. “Winning the FA Cup was incredible but this is a tough, tough day for the club.”

In Tuesday’s other game, Manchester City, who sacked manager Roberto Mancini on Monday, won 2-0 at relegated Reading with forwards Sergio Aguero and Edin Dzeko scoring late in each half.

City, last season’s champions, are now guaranteed second place after Brian Kidd took caretaker charge of the team following the departure of Mancini and his number two, David Platt, who left the club earlier on Tuesday.

Wigan, who have been in the Premier League since the 2005-6 season, have 35 points with one game remaining, four fewer than Sunderland in 17th position. Bottom club Queens Park Rangers have already been relegated along with Reading.

Arsenal have qualified for the Champions League in every full season that Arsene Wenger has been in charge since he became manager in 1996, and they travel to Newcastle United on Sunday knowing they can guarantee qualification if they win.

Champions Manchester United and City have already sealed their places in the Champions League group stage.

Third-placed Chelsea have also qualified for the Champions League but Arsenal, who are two points behind the west London club, can overhaul them for the final spot in the group stage. The fourth-placed team go into the Champions league playoffs.

The Premier League’s three relegated teams will be replaced by Cardiff City, who won the second-tier Championship title, and Hull City. Crystal Palace and Watford meet in the playoff final on May 27 to decide the third promoted team.

Wigan have conceded the most goals in the Premier League so far this season – 71 in 37 games.

Relegation means Wigan will miss out on about 45 million pounds in revenue from Premier League television rights deals which come into effect next season, and there are doubts over whether Martinez will stay in charge.

The Spaniard has been linked with the Everton post vacated by David Moyes who will take over from Alex Ferguson at Manchester United next season.

Missing out on the Champions League proper would cost Arsenal about 30 million pounds and Wenger has also said it would not reduce the club’s attraction to quality
reinforcements which many fans feel the team desperately need.