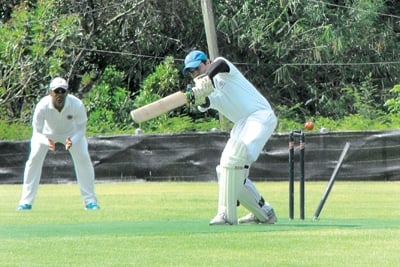 PHUKET: In celebration of the ACG opening, a Cricket Authority of Thailand (CAT) Select XI took on a mixed selection organized by the Asian Cricket Council (ACC) in a 40 over exhibition match.

Having won the toss, CAT decided to bat and sent in local boys Martin Foster of the Village CC and Val Guiraud of Laguna CC to open the innings. Both began warily and in the fifth over, before Foster offered his wicket, he was fortunately dropped at square leg.

Guiraud (6) lasted until the score reached 31 before being bowled by Kitanu. Only five more runs were added to the score when Foster (15) got underneath a Kitanu delivery and this time the catch was held by Saurab.

With the experienced Bill Stahmer (Laguna CC) and former Bangladesh captain Aminul Islam at the crease, the game became a lesson in batting technique for the young CAT cricketers. The ACC pair brought the score to 104 when Stahmer (18) was just beaten for pace and deemed lbw by umpire Raju. Aminul looked comfortable from the start of his innings, scoring 14 in his first over, which included three consecutive boundaries using a stylish and powerful off-drive. He reached his 50 in 68 balls and graciously retired to applause from the admiring gallery.

Matthew Stahmer took over Aminul’s scoring role and blasted his way to 41 from 52 balls with quality ground strokes, although dropped twice – on 16 and 21 – before Singh eventually plucked a catch off Pearwat’s bowling with the score on 179. Sehgal Sameer Khan and Neill Culpan helped push the score to 196 for the allotted 40 overs and an Outrigger lunch was called.

After lunch, ACC sent Saurab and Thanaitt to begin the run chase. Thanaitt raced to 38 off just 43 balls, but will consider himself lucky having been dropped when on 10. He was eventually dismissed by a wonderful catch by Jayasuriya off Guiraud’s pace bowling. Saurab hit a methodical 15 before being bowled by Culpan. Kitanu replaced Saurab and seemed intent on getting his eye in, but took too long and after 18 deliveries faced, had failed to get off the mark before being bowled by Patong’s Manesh Sadarangani.

Wanchana (65 not out) was next to face the ACC attack. He too was fortunate to reach his total when he was dropped on lucky 13. Yotsakorn partnered Wanchana until he was caught by Jayasuriya off Sadarangani’s accurate spin bowling.

The CAT team had their tails up and when Singh (6) was dismissed by another stunning catch by Guiraud, almost back-flipping to take it, an unlikely draw was sensed.

It was not to be, however, as Wanchana knocked the winning runs with three balls remaining even while carrying an injury that required a runner for the previous seven overs.

A deserving victory for the CAT boys proving Thailand’s cricket is certainly on the way up.