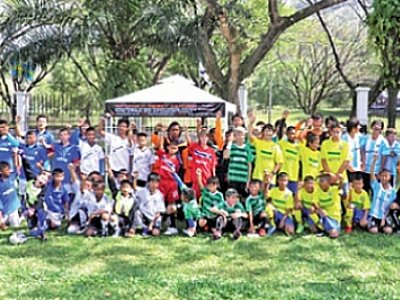 PHUKET: After a week’s break, the Fair Play League 2012 resumed back at the British International School (BIS), Phuket recently.

Judging by their efforts throughout the day, players had enjoyed the rest and were intent on ridding themselves of excess energy.

The U14 division matches were first to the field with one game on each of BIS’s manicured pitches. Thailand and France drew 2-2 in a thrilling match, both teams having had opportunities to seal victory in the dying minutes. Meanwhile, Germany White went down to a battling Brazil team on a 7-1 score line. However, in a shock result, undefeated league leaders Germany Green were defeated 6-3 by Argentina, who as a result of their win now joins the German team at the top of the table. It was a great game of attacking football, but it was Argentina who capitalized on opportunities in front of goal.

The U11 division was next to the arena. In the first round of matches, Thailand faded in the final minutes to lose 6-1 to Germany White after a spirited display. Brazil continued their title charge with a 3-0 win over Germany Green. In the final match of the U11 first round of games, France came back from 2-0 down at half-time to sting Argentina with a brace of goals and earn a 2-2 draw.

A second round of U11 matches were played after a short break, much to the delight of the young stars. Thailand missed out on claiming their first point of the competition when they leaked a late goal and lost to France, 5-4. Germany Green were impressive in their 4-1 win over Argentina and in the day’s last match, Brazil conceded their first goals of the competition, but continued their winning streak with a 3-2 victory over Germany White.

Week four of matches are scheduled to be played at Thanyapura Sports and Leisure Club in Thalang.

Season 8 champions, and currently in the league’s driving seat, were Portrait FC up against Honda. In a fast and furious match, Portrait FC didn’t take their foot off the gas and eventually powered past Honda on an 8-2 score line. Five goals on the night from Portrait’s striker Somsak certainly puts him in the picture for the golden boot award.

Thalang Tigers and Jitjongrut played out the second premier division match of the night. In a tense and even affair, Jitjongrut scored in the first half and managed to hold on to keep the Tigers at bay for a 1-0 victory and a deserved three points.

On the opposing pitch, SGS played Chevrolet in the evening’s initial first division encounter. Another close first half saw SGS take a 2-1 lead into the break. Chevrolet then scored straight from the restart, but it was SGS that changed gear as they accelerated onto a 6-3 victory.

TSLC then played Ultraman in the last match of the day with both teams going into the match unbeaten. It was a guarded game, as neither team wanted to lose their league position. However, a goal either side of half time gave TSLC the victory and bragging rights with a final score of 2-0.