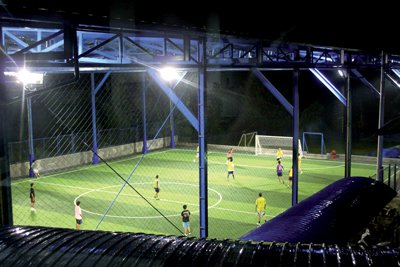 PHUKET: With a plethora of modern sporting facilities springing up on the island, more and more organized competitions are also appearing to take advantage of the technologies being afforded to the local community.

Gone are the days of playing on a hacked out piece of wasteland in the searing afternoon heat because no lighting was available after 6:30pm. A tumble on such a ground could result in a slight graze or a severe gash depending on the size of stone encountered when plowing into the dirt.

Now with the establishment of such facilities as Football Island in Phuket Town, which joins the ranks of Thanyapura, Soccer Arena and just recently QSI, sports lovers, and in particular footballers, are able to enjoy their beloved game in professional surrounds and not have to scamper away from work to make a 4pm kickoff so they can have a game before the sun goes down.

One man who has endured the football-playing venue dilemma for several years is Karl Ward from Norway. Karl runs a web design company when not on the football pitch and following years of tournaments and weekend friendlies, decided to put together a league for players in Phuket Town. He also manages the phuketfootball.com website.

“There has always been a lack of organized competitions in the Phuket football community, so now that we have these new roofed artificial grass facilities conveniently located in the town [Football Island], why not get started?” said Karl.

“Everyone enjoys a properly structured competition, and now is the right time and place. The expat football community in Phuket is growing quickly, and I think we should be offering an organized competitive format and with help from Football Island manager, Joseph Arimathea, and the HeadStart International School we have done just that,” he added.

The new Phuket Super Soccer League (PSSL) is up and running with 10 teams entered for the inaugural season, but organizers expect the number of participating teams will increase as the league develops.

“The league will be continuous. We will re-start new seasons a few weeks after the current one ends, meaning there may be three to four seasons every year. As we get more teams involved, we may also consider two divisions with relegation and promotion,” Karl said.

Such a facility and league is also a great way to bring the Thai and foreign communities together in order to enjoy the game of football. Indeed Karl mentions that there are already a number of Thai players and teams involved.

“The league set up currently has about 75% foreign players and 25% Thai players. There is one fully Thai team, four mixed teams and the rest are foreign in origin. However, several more Thai teams have already expressed interest for the next league season,” said Karl.

“Football is very popular in Phuket, amongst Thais and foreigners alike. Previously, there have only been various low quality sand pitches around, but now that we have several floodlit artificial grass facilities that can be used at any time of day, it brings an entirely new dimension to the community, and welcomes more players into the game,” he added.

As with all good sports people, they haven’t forgotten the kids, who will carry the football baton as the current players move into the twilight of their amateur careers.

“There is also a football school for kids linked to the Football Island pitch, primarily managed by the HeadStart International school. Both Joe and I from the Super Six league are also involved with organizing the football school, where all kids are welcome,” Karl said

The new Phuket Super Six Football League is played at Football Island which is next to HeadStart International School opposite Makro. It is played every Wednesday and kicks off at 5:30pm until 9:30pm in a six-a-side format.