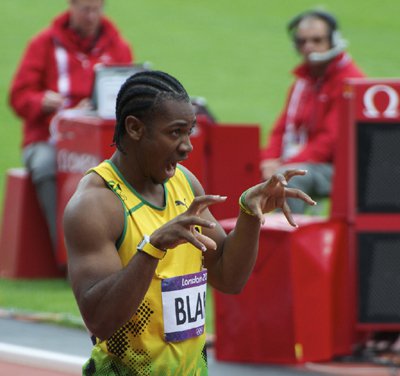 PHUKET: The following is a round up of international sports news, compiled by the Phuket Gazette for the island’s international community.

ATHLETICS: Yohan Blake did the unthinkable at the Lausanne Diamond League meeting: he managed to take the headlines away from Usain Bolt. Blake ran the third fastest 100-meter race of all time, clocking 9.69 seconds. Bolt holds the world record at 9.58 seconds.

Bolt won the 200-meters. Both men have agreed not to race against each other for the rest of the year, unless they are paid handsomely for their 9 seconds of work. Blake rejected the chance to race at the Birmingham Grand Prix after the organizers offered him an ‘insulting’ 25,000 pounds.

Mo Farah became a darling of the British public by winning the 5,000 and 10,000 meters at the Olympics. Farah was born in Somalia and moved to Britain when he was eight.

MOTO GP: Casey Stoner broke his ankle at Indianapolis last weekend ending any chance he had of retaining his MOTO GP title. Stoner, who retires at the end of this season, is currently in third place in the standings. Stoner’s crash happened during qualifying but he still managed to claim fourth place in the race despite his injury.

An own goal gave Liverpool a slim one goal lead over Hearts in their Europa League Play-off game. Newcastle drew 1-1 with Greek side Atromitos.

On to the semifinals, the Thais are pitted against a strong Russian side, who advanced after toppling Azerbaijan 4-0 in their respective quarterfinal. The other semifinal will be a Ukraine vs Portugal.

The Ukrainians advanced from the quarterfinals on a shock win over Brazil 3-1, while Portugal had little trouble with China in their 8-1 triumph.

Both semifinals will be held simultaneously at 1am, Phuket time. The bronze and gold medal matches will be held on Sunday at 10pm and 12:30am, respectively.

Live streaming of the matches is available here.

The 24 teams that qualified for the 2012 FIFA Futsal World Cup, to be hosted in Thailand from November 1-18, will be drawn into their respective groups this afternoon in Bangkok.

Following the draw, Thailand, ranked 11th in the world, will host world number one, Spain in a friendly, to be played from 6pm, at Bangkok’s Nimibutr Gymnasium.

Then on Sunday a second friendly will be played at 5pm at the Korat Chatchai Gymnasium in Nakhon Ratchasima province.

Thailand spent the last few months on a training tour in Europe where they played against several professional Spanish, Belgian and Dutch clubs.