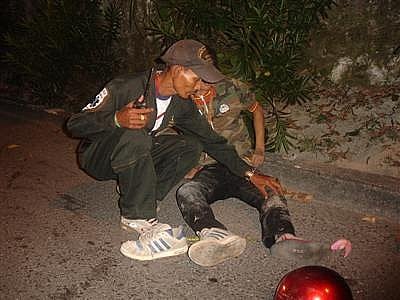 PHUKET: The Interior Ministry has set the “target number” of Phuket road accident deaths at two for the upcoming Songkran Festival, during which police will be under orders to strictly enforce provisions in the Alcohol Control Act.

San Jantrawong, who heads the Phuket Office of the Departent of Disaster Prevention and Mitigation (DDPM-Phuket), said the Interior Ministry’s national Road Safety Center has designated the period from April 11 to 17 as this year’s ‘Seven Days of Danger’ road safety campaign.

The same formula was applied to calculate the target numbers for road accidents requiring admittance to hospital (61) and the total number of accidents reported (57).

In areas designated as Songkran waterplay zones, the sale of alcohol will be strictly forbidden, Mr San said.

Residents and tourists alike are advised to protect themselves from infection for a variety of microbial diseases often associated with Songkran, including influenza, pneumonia, conjunctivitis, diarrhea and the common cold, he said.

Songkran revelers are also advised to protect themselves from heat stroke.

As in years past, an island-wide network of police checkpoints will be established in key locations to stop motorists and inspect for a variety of infractions that range from failure to wear a seat belt to driving under the influence of alcohol.

The locations of the 11 primary checkpoints are little changed from prior years:

Rassada: Thepkrasattri Road, in front of the Muang Mai building

Karon: Patong-Karon Road, in front of the Ramada Resort