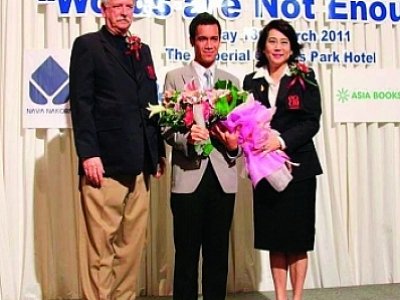 He will represent Thailand in the global finals of the competition in London in May this year.

Philip was one of four Stamford International University (STIU) students who competed against 14 other students in the semi-final round of the competition on February 25.

The contest, organized by the Ministry of Education and the English Speaking Union, is open to Thai students from high schools and universities across Thailand.

Phillip and Hataichanok qualified for the final round, along with two competitors from Chulalongkorn University and one from Assumption University (ABAC).

The final round began on March 18, with competitors speaking on the theme “Words Are Not Enough”.

“I had to think about, in what cases when words aren’t enough,” explained Philip.

“I wrote about the first things that came to my mind – saying one thing, but doing another; promises; the differences between a manager and a leader; and examples of people to back up my points.

“I knew what I wanted to write about – words and actions – so I made that the title and the central idea of my speech,” he added.

“First of all, I would like to thank my professor at my university, William Stanley, for helping me through the editing and the rehearsing. We spent a lot of time doing my speech over and over again to get it right.

“Another person I would like to thank is a former teacher back in my high school in Phuket, Rachel Geary.

“She also assisted me in the editing and was probably the teacher that helped me out the most in terms of how to write good essays,” he said.

“Also to my friends, family, and university for supporting me through this. I’ll do my best to represent my university and my country at the competition in London.”