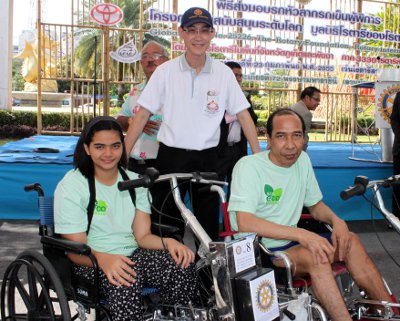 PHUKET: The lives of nine disabled people from Phuket and Phang Nga took a turn for the better on Thursday when they took possession of high-tech wheelchair “pullers” donated by local and international chapters of Rotary International.

The handover ceremony, at Queen Sirkit Park on Thalang Road, was presided over by Sanguan Kunaporn, head of the Rotary Club of Tongkah and a nominee for the governorship of Rotary District 3300, which covers Phuket and Phang Nga.

Dr Sanguan, a world-renowned surgeon, said the handover was part of a larger 1.2-million-baht project to provide a total of 40 similar units to people unable to walk.

The pullers, designed by Thammasat University engineering professor Dr Banyong Rungruengduayboon, effectively turn the users’ original wheelchairs into tricycles that can reach speeds of up to 20 kilometers per hour and run for up to three hours on a single charge.

When not needed, the 30,000-baht devices can be easily detached and folded up for easy transport by car.

Dr Sanguan said candidates to receive the devices are those who do not have the ability to walk but retain upper body strength.

“There are about 250 disabled people who are needlessly immobilized in Phuket,” he said.

“Recipients will not need the devices when they are at home, but they will greatly increase their ability to travel outside,” Dr Sanguan added.

Among those attending the handover ceremony were representatives of the eight Rotary Club District 3300 chapters, as well as members of the Phuket Red Cross.

A special guest was 14-year-old Nitcharee Pen-eakchanasak, who lost both her legs in an accident in the Singapore mass transit system in April last year.

Miss Nitcharee, whose bravery has been an inspiration to people around the country, has since been fitted with prosthetic legs thanks to financial assistance from HRH Princess Maha Chakri Sirindhorn.

At the ceremony, Miss Nitcharee continued to put on a brave face despite suffering from an unrelated bout of food poisoning.

Among the recipients at the event was 19-year-old Arisa Ratso, a second-year student at Sukhothai Thammathirat Open University.

Arisa’s mother, Sutida, said that Arisa is the only Thai with the rare genetic disease Friedreich’s ataxia, a degeneration of nerve tissue in the spinal cord that results in impaired muscle movement of the arms and legs and other serious symptoms.

Despite her young age, Arisa has been in treatment for the condition at Siriraj Hospital for over a decade.

“It’s great for her to have the added convenience and mobility. She is now learning how to use the electric puller with her wheelchair,” she said.

Another recipient, 55-year-old Ong-ard Tanjia, suffered an accident in 1991 that affected movement on the left side of his body.

“I’m quite happy to have the electronic puller, as before I only had a normal wheelchair,” he said.

However, he still has sufficient strength and motor control to move around his house without a wheelchair, he said.