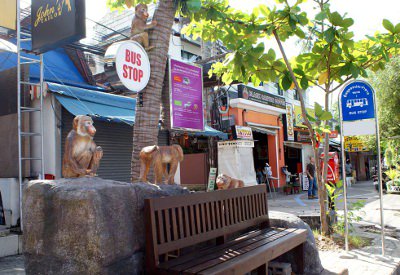 Worawut Ma-in, an expert in logistics and acting chief of the Krabi Transport Office, says construction of the 13 stops has just been completed.

The project was launched at the request of the province’s Chamber of Commerce, he said.

Local business people had complained that tourists were finding it difficult to catch local buses because there were no stops showing them where to wait, he said.

Of particular concern was the route between Ao Nang and Krabi Town, which is popular with foreign travellers. Many tourists had problems catching buses on the route, since they did not know when the buses would arrive – or even where they stopped, he said.

The Krabi Transport Office therefore worked with the Chamber of Commerce to launch the bus-stop project, he said.

The bus stops have been designed so that they look attractive and unique, as well as display all the information tourists need in both Thai and English.

One of the two designs used on six stops in the commercial area of Ao Nang Beach features sculptures of monkeys sitting down and strolling around.

The designs were chosen so they would fit in with the lively atmosphere of the popular tourist resort, without ruining the view of the beach.

The new structures have generated a lot of interest from tourists, since the area has not had any bus stops until now, said Mr Worawut.

The seven other bus stops along the bus route from Ao Nang to Krabi Town use a different design.

The route travels from the Khlong Jilad Intersection, on to the Ban Chong Phlee Intersection and finishes at the Ao Nam Mao Intersection.

Phuket Rotary Club rolls out high-tech devices for the disabled