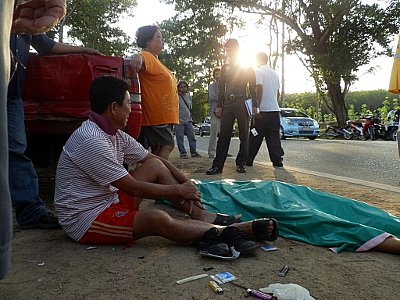 PHUKET: A Phuket teenager returning from school was killed yesterday when he lost control of his motorbike and hit the back of a pickup truck parked by the side of the road in Srisoonthorn.

Thalang Police were notified of the accident at 5:20pm. At the scene, on Srisoonthorn Road westbound in front of The Valley 2 residential estate, they found the body of 17-year-old Suphakit Phachonroongrote lying beside the road.

A Phuket Kusoldharm Foundation rescue worker at the scene told the Phuket Gazette Mr Suphakit would have died instantly in the crash.

The force of the impact was evidenced by a large dent in the tailgate of the Isuzu pickup, registered in Nakhon Sri Thammarat.

No crash helmet was found at the scene of the crash, a rescue worker said.

Notified by relatives who happened to be passing by, the boy’s parents arrived at the scene shortly after police and rescue workers.

Mr Suphakit, a resident of Cherng Talay, was in his final year of study at Phuket Wittayalai School.

Kusoldharm Foundation workers transported the body to Thalang Hospital for examination and storage until funeral services are arranged.

Phuket Rotary Club rolls out high-tech devices for the disabled