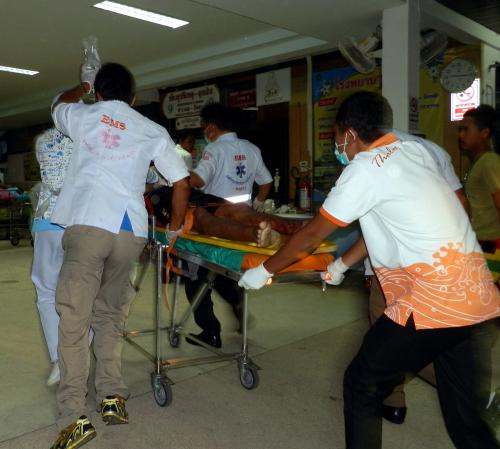 PHUKET: A 20-year-old determined to hold on to his girlfriend was stabbed to death by his romantic rival in Cherng Talay on Tuesday evening.

Police arrived at the scene to find a crowd of onlookers and a pool of blood; Autthapon “Adam” Kahapana, 19, had already been rushed to Thalang Hospital.

Iyara “Rudy” Puttaraksa, 20, had fled, but was soon found by police, hiding behind the Bang Tao Sanatorium, said Lt Prasert Tongphrom of the Cherng Talay Police.

Mr Iyara confessed to police that he had met Mr Autthapon to tell him to leave his girlfriend alone.

Mr Iyara went home to get a knife and returned to stab Mr Autthapon in the heart and neck.

Medical staff at Thalang Hospital did their best to save Mr Autthapon, but he bled to death, said Lt Prasert.

“Mr Iyara has been charged with murder,” he added.