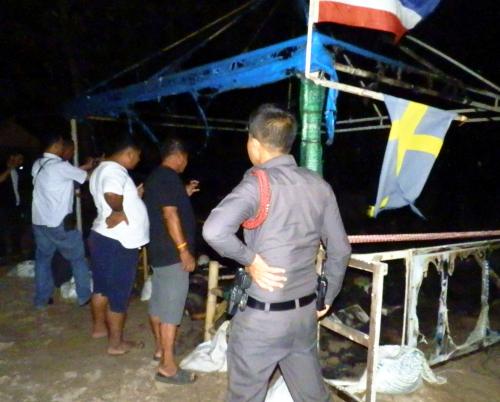 PHUKET: A small bar at Bang Tao beach was burned to the ground late on Tuesday, with no explanation thus far for the blaze.

On hearing about the fire shortly before midnight, firefighters and police officers rushed to the scene.

“When we arrived, we found the bar – which apparently had no name – ablaze. Despite the modest size of the bar, as a result of a heavy wind it took firefighters over 30 minutes to bring the fire under control,” Lt Prasert Tongphrom of the Cherng Talay Police said.

“The fire completely destroyed the bar. By the time it was extinguished, there was nothing left,” he added.

The estimated cost of the damage was reported at about 300,000 baht.

Although the material damage was considerable, there were no casualties.

“No one was inside the bar when the fire started, as it was open only during the day,” Lt Prasert said.

“Mr Sanong went to work, he’s a police volunteer in Thalang, and Ms Sasiriya was sleeping in her house about 500 meters away,” he added.

“The case has been handed over to the Phuket Forensic Office to determine the cause of fire,” Lt Prasert said.

Phuket Romance: Man stabbed to death in feud over girlfriend