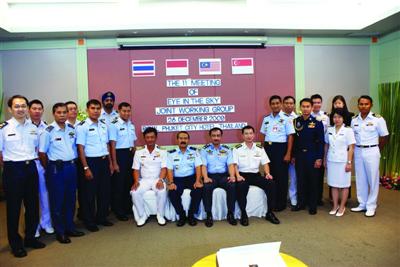 PHUKET CITY: Royal Thai Navy officers and their counterparts from Malaysia, Singapore and Indonesia are taking part in the four-day ‘Intelligence Exchange Group Meetings’ aimed at boosting security in the Malacca Strait.

The talks, which began yesterday, are being held at the Royal Phuket City Hotel.

The meetings will include information exchanges, progress reports and discussions of a range of issues affecting safety and security in the Malacca Strait, through which about a quarter of all the world’s shipped oil passes.

Trilateral Co-ordinated Patrols for Malacca Straits were established in Malaysia, Singapore and Indonesia in 2004 to suppress pirate and terrorist attacks in the strait, one of the busiest shipping lanes.

It is hoped the talks will lead to the signing of a comprehensive new treaty between all four countries.

Thailand signed up to join the group patrols in September, 2008 and began joint operations the following month.

It has also been operating ‘Eyes in the Sky’ maritime aircraft patrols since January of this year.

Phuket is one of four designated control points for co-ordinated patrols, together with Belawan and Batam (Indonesia), Lumut (Malaysia), and Changi (Singapore).