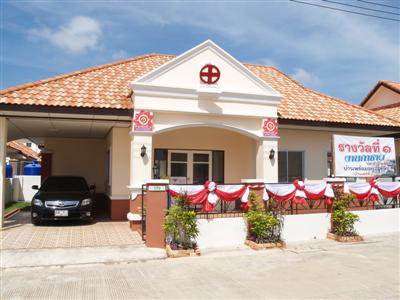 PHUKET CITY: Phuket is getting ready for what promises to be the biggest Red Cross Fair ever, with the grand prize in the annual raffle no less than a house valued at 2.7 million baht.

Phuket Governor Wichai Phraisa-ngob yesterday morning chaired a press conference to announce the fair, which will take place at the main staging area at Saphan Hin for 11 days starting from December 30.

This year’s grand prize will be a 56-square-meter house in the Phanason Parkville 3 housing estate off Thepkrasattri Rd in tambon Srisoonthorn, Thalang.

There are Red Cross fairs in every province of Thailand, but Phuket will be the first to give away a home as a raffle prize.

The home was donated by the Panason Group, which has seven large real estate projects completed or underway on the island – including the controversial Phuket Phanason City Project in tambon Wichit.

The second-place prize is a Toyota Vigo. Five motorcycles will be given away to lucky third-place winners. Numerous household appliances and other prizes will also be raffled off.

As in years past, there will be many booths selling a wide variety of goods including foods and handicrafts produced under the government’s One Tambon One Product (OTOP) program.

Entertainment will include stage performances by well-known national bands as Phuket’s very own Wichayanee ‘Nong Gam’ Peagrin, winner of the 2008 The Star contest, the Thai equivalent of American Idol.

They won’t be the only ones singing though, because for the first time the fair will also include a bird singing contest.

The Red Cross will also work with staff at Vachira Phuket Hospital to provide vision testing and other services free of charge.

As of today there was no beer sponsor named for this year’s fair, a source at Phuket Provincial Hall told the Gazette today.

Embezzlement cases up in Phuket