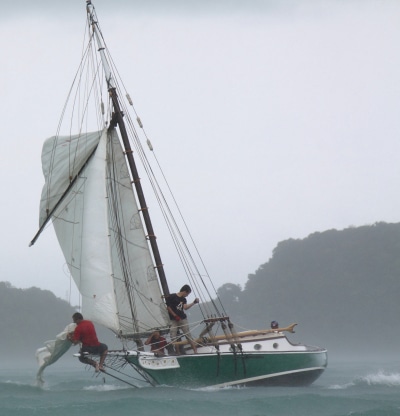 PHUKET: Winds gusting up to 35 knots and driving rain drew the Six Senses Phuket Raceweek regatta to a dramatic close yesterday with two men being catapulted overboard and at least one boat being left with her mast in tatters.

The racers received an early warning before the final day of racing after news spread yesterday morning that Stuart Williamson’s Skandia Endeavour of Whitby had drifted off anchor during the night and was jammed on rocks at Koh Bon.

A local fishing boat was used to drag Skandia off the rocks and tow it to Ao Chalong for repairs.

With this news in their ears, dark clouds overhead and a storm looming ominously nearby, racers headed to the start line.

Ray Waldron’s Surf Patrol, a brand-new Phuket 8, was the first to suffer. The boat almost capsized after being hit with a gust measuring over 30 knots, knocking the boat sideways and sending two crew members over the side.

Grenville Fordham’s Nina and Royal Thai Navy 5 were quick to render assistance and the crewmen were recovered without injury.

The next casualty was Nigel Cross on the catamaran Little Soul, which suffered a broken mast near the start line – again, without injury to the crew.

Despite many captains deciding to spare their boats the risk of damage and retiring from the day’s races, many sailed on for a chance of picking up points and securing podium places.

Scott Duncanson sailed well to keep his Phuket 8 Quantum Fusion M safe and win the day’s race on corrected time, but it was not enough to keep Ben Copley’s Katsu at bay.

Antony Hasting retired Baby Tonga from yesterday’s race due to boom damage, but had amassed enough points to finish third overall in the class.

Peter Dyer’s Sea Bees suffered sail damage and did not race yesterday, but had amassed enough points to claim second place overall in the class.

Jaray Tipsuk’s Royal Thai Navy 5 were awarded points as they ripped their headsail while rendering assistance to the overboard Surf Patrol crewmen, sliding them into third place overall in the class.