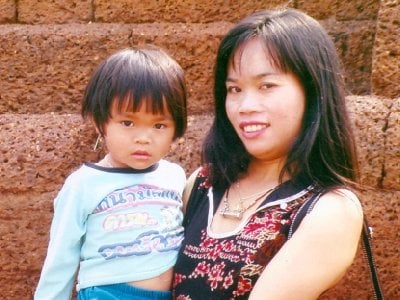 PHUKET: The two young children of Wanphen Pienjai, the Phuket bar hostess murdered by American Ron Fanelli, have been accepted into the Scholarship Program of the Rotary Club of Patong Beach (RCPB) and will receive financial support on an ongoing basis.

Meanwhile, Wanphen’s mother, Sa-ard Maliwan, 59, has told the Phuket Gazette that she gave 5,000 baht of the 20,000 baht in donations raised through the newspaper’s website (for immediate funeral expenses) to the family’s local temple in Petchaboon, where her daughter’s ashes are now kept.

“I received 20,000 baht on Tuesday [July 20] and I donated 5,000 baht for building a section of temple wall. Wanphen’s ashes arrived on Thursday and they will be put in the temple. The rest of the money will be kept for the children,” said Mrs Sa-ard.

Wanphen’s body was cremated in Phuket on July 14.

She was murdered on June 18 and her remains were discovered in a suitcase in a remote area off Chao Fa Thani Rd, on June 24.

Reached by telephone to her home late last week, Mrs Sa-ard said, “I haven’t seen the guy [Fanelli] yet, but people have called me and asked how such a handsome man could be so cruel. I am happy the police caught him, but I still feel very sad at losing my daughter. Nothing can ever bring her back.”

“Normally, Wanphen sent us money. I don’t know who else can support us now. She was the only one who gave us hope and now she is dead.

“She was my only daughter. Her ex-husband knows what happened, but never came to visit. He probably has a new family already,” she added.

Wanphen, who used to work in Pattaya, was last at the family home in April this year, just before her move to Phuket.

Mrs Sa-ard described her daughter as a straight-talking person, loyal and generous, always inviting neighbors to join them for dinner. “She was kind and never abandoned me,” said Mrs Sa-ard, who is blind in one eye.

“My left eye is blind because I fell into a fire when I was one year old. I didn’t get any treatment because the village was in a remote, rural area back then,” she explained.

To earn at least some money Mrs Sa-ard has a part-time job cutting grass.

“The older child knows his mother is dead, but the little one doesn’t realize it yet. I haven’t told her because she hasn’t asked.

“Iang hasn’t said anything about it. Farm just thinks her mom is off working. Sometimes when women walk past our home she [Farm] yells out how happy she is that her mom has finally come home,” Mrs Sa-ard said.

Readers wishing to make donations to the Rotary Club of Patong Beach can be made to the following account:

For further details about the RCPB’s Scholarship Program, click here.