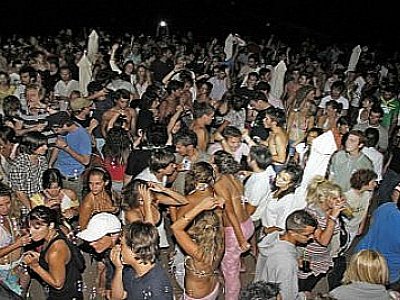 PHUKET: Paris Hilton’s announcement late last month that a two-day dance party will be held at Surin Beach to celebrate New Year 2013 has set the cat among the pigeons, sparking a debate over whether or not Phuket should host such large-scale events.

The event, being organized by Sydictive Element, is hoping to bring 14 world-renowned DJs and artists to Phuket, including LMFAO, Akon and Basement Jaxx. About 50,000 people are expected to join the event, not including the 4,000 staff the organizers say they will need to hire to make sure the mega-party runs smoothly.

However, there has been much resistance to the party going ahead, mostly from high-end hotels at Surin Beach. The managers of eight top-end resorts in the area claim that just the announcement of the event has already prompted room booking cancellations from tourists totaling more than 8 million baht.

Many local residents also foresee a nightmare if the event is allowed to go ahead. Just where support for it might lie has not been made clear.

Among the arguments against Phuket hosting such parties are the noise, the likelihood of drugs and alcohol misuse, the potential for violence and the impact on the environment.

In light of the ongoing debate, the Phuket Gazette asks in its latest online poll, “Should Phuket host mega-event beach parties such as the Paris Hilton mega New Year Party at Surin Beach?”

The options available to choose from are:

5) No – Never. Events such as this do Phuket tourism more harm than good

To view the results of our previous poll, asking which are the best ways for foreigners to contribute to the local community in lieu of visa runs, click here.

To expand upon your views on this issue, leave a comment in the readers’ forum below, or in the island’s largest online community at the Phuket Forum. The Phuket Gazette welcomes any input that meets our House Rules.

FIFA Futsal World Cup: Thailand face Spain in round of 16

Phuket motorists in three death-defying accidents in one day