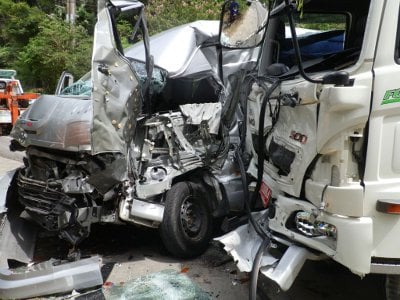 PHUKET: With the tourism high season fast approaching and Phuket’s roads about to become much busier, several Phuket motorists managed to escape death in three separate serious accidents all occurring within 18 hours.

The most recent was a collision between a tour van and a six-wheeled dirt truck on the Patong-Kamala road at about 11:30am today.

Capt Jakkapong Luang-aon of the Patong Police arrived at the scene, just outside Kalim, to find 47-year-old tour van driver Prasert Srisuk had suffered only slight injuries to his back, but that his passenger Yuwadee Mekphuk, 38, had suffered more serious injuries and remained trapped inside the wreck.

Rescue workers were forced to cut her free from the twisted metal before rushing her to Patong Hospital.

Truck driver Eakkasit Naknui, 31, told the police that he came around one of the many sharp bends on the winding road on his way to Kamala to find himself facing the oncoming tour van.

Both vehicles appear to have swerved to avoid the collision, but in doing so exposed the front passenger door beside Yuwadee to bear the brunt of the impact.

The nigh-head-on collision in Kalim followed a three-way motorbike crash near the Phuket Technology College on Thepkrasattri Road, on the north side of Phuket Town, at about 9:10pm last night.

Sub Lt Jariyawat Taencheun of the Phuket City Police told the Phuket Gazette, “A chopper-style bike, heading toward Phuket Town had stopped in the middle of the road and was about to make a right turn across the oncoming lane to get to the Esso gas station.

“However, before the driver had time to proceed, a red Honda Click motorcycle heading in the same direction at high speed crashed into the rear of the chopper.”

The force of the impact shunted the chopper into the oncoming lane, whereupon it was struck again by a black Honda Click coming from the opposite direction, said Lt Jariyawat.

“Fortunately, none of the riders were seriously injured. Sgt Maj Sahas and Mr Suchol both have minor cuts and bruising to the legs and Mr Anurak, who was not wearing a helmet, suffered minor lacerations to the head,” Lt Jariyawat said.

Police have charged Mr Anurak with reckless driving causing damage to a person and a property.

That lucky escape followed a car-motorcycle collision in Paklok late yesterday afternoon that resulted in the car ramming into – and breaching – the side of a house.

Lt Col Eakkasit Pinkaew of the Thalang Police said the accident occurred about 400m east of the Heroines Monument at about 5:15pm.

“Ms Aree said that when she started to make the u-turn, she had not seen the motorcycle coming. When she did see it, she panicked and accidentally pressed hard on the accelerator, which made the car drive into the house by the side of the road,” he said.

Although the car broke through the wall, luckily no residents in the house were injured in the impact.

However, the motorbike driver, 21-year-old Wichuda Nga-kaew, and her friend, Yenrudee Singsuthum, 27, who was riding pillion, both suffered broken legs in the ensuing collision.

“Ms Aree, the car driver, suffered bruises and scratches. All of them were taken to Thalang Hospital,” Col Eakkasit said.

“We need to collect more evidence and question more witnesses before we can press any charges related to this incident,” he added.

Phuket Poll: Should Phuket fight for the right to party?