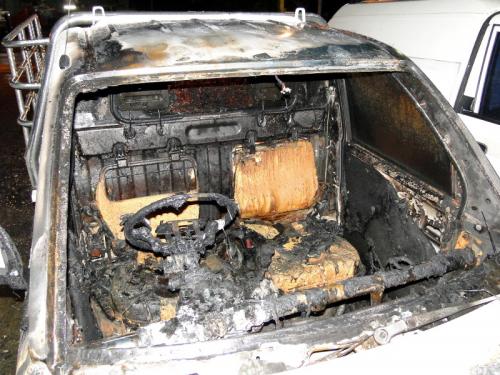 Police responded to a report just after 1am that a vehicle was ablaze at a commercial building near the entrance to Wat Manik in Srisoonthorn, Thalang.

Firemen took 30 minutes to put out the fire, which appeared to have started in the vehicle parked in the middle, causing serious damage to the vehicles parked next to it as well.

Phuket Provincial Police Commander Choti Chavalviwat told the Phuket Gazette that the initial investigation showed that the three vehicles were modified to run on fuel carried in the LPG tanks in their beds.

“It is possible that there was a problem with the tank of the middle truck. Otherwise, it may be a case of arson,” he said.